In the wake of Paris atrocities, supporting civil liberties and non-interventionism just got way less popular. 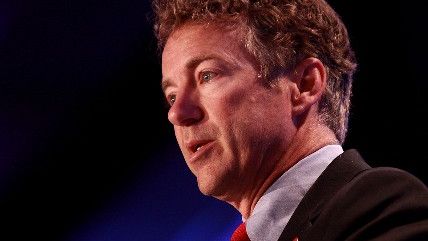 geopolitics to shift sharply rightward," as Michael Hirsh suggests in Politico? And if so, does that mean Rand Paul's message of libertarian-ish politics is officially dead in the water with regards to the GOP presidential nomination?

Hirsh writes, "Civil liberties, which made a comeback with the Snowden revelations of 2012, will also now fade once again as an international issue," and "This new right-wing normal will also no doubt seal the fate of less hawkish candidates—in particular the already-fading Rand Paul, whom (Marco) Rubio denounced at the last debate as a 'committed isolationist' and who can no doubt hear the tolling of political oblivion even now."

This weekend, fresh off their skirmish in last week's Republican presidential debate and refecting the fallout from the Paris attacks, Paul and Rubio took shots at each other's records on national security and immigration reform.

Speaking in Orlando, Paul blamed Rubio and his work with the bipartisan "Gang of Eight" senators who rejected his amendment (which included some very restrictive and punitive policies) to an immigration reform bill in 2013:

"We let our guard down, but when I introduced my amendment to the immigration bill, unfortunately I got some opposition. Your senator, in fact, opposed me on this," he told the crowd.

"I tried to pass something that I think was a conservative proposition to the immigration bill, that would have more scrutiny for refugees, for visitors, for students."

Rubio's retort was reported by The Hill:

"Well, look, Rand just uses this sort of rhetoric to distract from his very weak record on national security issues," Rubio said on ABC's "This Week."

"I mean, he's been one of the leading figures trying to gut American intelligence programs," he added.

He said Paul wants to get rid of programs that would help prevent terrorist attacks on U.S. soil.

"Let's say that, God forbid, what happened in Paris happened in Washington. We would want to know, we would want access to these people's phone records, because it would give us clues as to who they were working with, who probably may be involved in plots themselves later on down the road," Rubio said.

"Rand Paul wants to get rid of that program."

Paul may indeed be attempting to find a way to position himself to the right of Rubio on immigration, because his relative non-interventionism and skepticism of mass surveillance by the federal government has already limited his appeal among Republican voters.

The Wall Street Journal, in an op-ed mostly lambasting President Obama's foreign policy and efforts to battle Islamist terrorism, concludes with this shot at Paul:

As for the Republicans, Rand Paul's already small chance at the nomination has now vanished. Whatever his contributions on economics, his libertarian foreign-policy instincts are too similar to President Obama's. GOP voters will increasingly look to sort the other candidates by their experience and judgment, not merely tough talk. The election should be a referendum on keeping America safe.

As my colleague Ed Krayewski wrote last week, Rand Paul is not an isolationist, but Paul's fairly mild hesitance to engage in a ground war against an asymmetrical enemy in a chaotic region where we've already dumped so much blood and treasure may yet prove to be a non-starter in a Republican field that will only grow more hawkish in the wake of Paris.