Calls for Boots on the Ground, Immigration Restrictions, and Expanded Surveillance Powers Are Coming in Response to Friday's Terrorist Attack in Paris 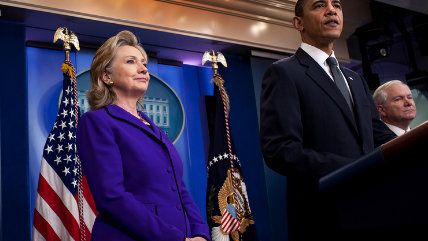 CNN's Jim Acosta captured the prevailing mood in the corridors of political power today when he asked President Obama about America's willingness to step up attacks on ISIS following the terrorist attacks in Paris last Friday.

"I think a lot of Americans have this frustration that they see that the United States has the greatest military in the world, it has the backing of nearly every other country in the world when it comes to taking on ISIS," Acosta said. "I guess the question is, and if you'll forgive the language, is why can't we take out these bastards?"

It was as much a statement as a question: People are upset, and they want something done.

We've already seen a lot of calls for action in the wake of Friday's terrorist attacks in Paris, and we can expect to see quite a few more. Those calls are likely to proceed down a few broad lines.

First, there will be calls to step up direct military action against ISIS in and around the turf it controls in Syria. More bombing runs and more special operations exercises will be part of the equation, but for many that won't be enough. Lots of commentary will call, in some cases explicitly and in many more implicitly, for a massive deployment of U.S. ground troops.

South Carolina Sen. Lindsey Graham, not surprisingly, has already reiterated his idea that we should send 10,000 troops to Syria and Iraq. And in an op-ed for The Washington Post this weekend, Mitt Romney wrote that "we must wage the war to defeat the enemy, not merely to harass it. For over a year, the president has clung to the hope that an air campaign is sufficient. It demonstrably is not."

So far, however, the Obama administration seems unenthusiastic about troop involvement, with deputy national security adviser Ben Rhoades saying, "We don't believe U.S. troops are the answer to the problem." An unnamed senior administration official did, however, suggest to The New York Times that stepped up airstrikes and special operations raids would be on the table.

Second, there will be calls to stop or slow the flow of Syrian refugees. This is already happening in Congress, where Republican legislators are saying that the security risk of harboring refugees is too high.

"There's no possible way to screen them," Representative Devin Nunes, the California Republican who chairs the House Intelligence Committee, said on CBS's "Face the Nation."

"It should be stopped immediately," he said. "Look, we feel for these refugees, but the bottom line, if you don't want refugees, then you have to go into Iraq and Syria and defeat ISIS."

At least four Republican state governors—Greg Abbot of Texas, Robert Bentley of Alabama, and Rick Synder of Michigan, and Rick Scott of Florida—have already said that they will not allow Syrian refugees into their states, though it's not exactly clear what the mechanism for the bans might be, or if they have the legal authority to enforce these proposed restrictions.

Finally, expect an increased push for additional government surveillance powers, especially online. Some reports have already suggested that the attackers in Paris relied on the Playstation 4 gaming network to communicate because of the relative anonymity it provides.

It strikes me that, however that conversation plays out, the attacks are likely to have an additional effect on surveillance policy discussions in the United States — in two years, when the FISA Amendments Act of 2008, especially section 702 (the statutory authority for both the PRISM and "upstream" collection programs) expires.

Recall that the core of section 702 is programmatic surveillance directed against non-US persons reasonably believed to be outside the United States, i.e., targets like the Paris attackers.

All of these ideas, and probably more, will be debated hotly and heavily over the next few days in Congress, in the media, and on the campaign trail. The aggressive phrasing of Acosta's question, designed to reflect the anger that just about everyone rightfully feels, suggests the tenor with which discussions about these policy ideas are likely to proceed.

Anger and even outright rage are entirely reasonable and appropriate in situations like this, but as the history of rushed and poorly conceived policy responses to horrific and and terrifying events suggests, they're not great foundations for good policy. It's perfectly understandable that people would want to do something, anything in response to an attack like this, but it's also worth taking the time and effort to consider whether it's doing something workable and effective, or whether it's doing something just to do something, because it feels like that's what should be done.