Trump's proposed violence against families and communities is a recipe for social strife fueled by bigotry. 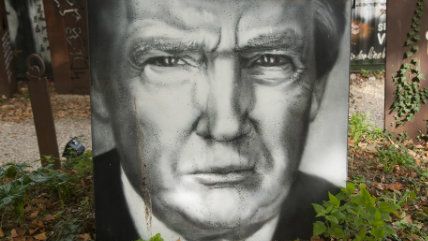 If elected president, Donald Trump says he would create a "deportation force" to carry out his pledge to expel more than 11 million people from the United States merely because they lack government permission to be here. "We have no choice if we're going to run our country properly and if we're going to be a country," he said during the Republican debate Tuesday night.

Wrong on both counts.

Of course we have a choice. We can choose not to deport the 11 million individuals, the vast majority of whom have never harmed anyone. On the contrary, they've produced and purchased goods and services, not to mention enriching their communities. And the last time I looked, the presence of those peaceful folks has not kept us from being a country. (If not being a country means there's no government to bomb and deport people, then put me down for that.)

Once again, Trump's words bear no resemblance to reality. We should be used to this by now. He's the Bullshitter-in-Chief.

Fortunately, most if not all of his rivals think mass deportation is an insane idea—not that they're any great shakes on immigration. They all support "securing the border," and I can't recall any of them condemning government sanctions for private enterprises that hire people who lack government papers (E-Verify).

Before continuing with Trump's horrendous proposal, we ought to acknowledge that Ted Cruz also distinguished himself on this issue during the debate when he said, to hearty applause:

I understand that when the mainstream media covers immigration, it doesn't often see it as an economic issue. But, I can tell you for millions of Americans at home watching this, it is a very personal economic issue. And, I will say the politics of it will be very, very different if a bunch of lawyers or bankers were crossing the Rio Grande. Or if a bunch of people with journalism degrees were coming over and driving down the wages in the press. Then, we would see stories about the economic calamity that is befalling our nation. [Emphasis added.]

If, as I've been told, Cruz in his younger years attended seminars on free-market economics, we can chalk up his nativist fear-mongering to sheer demagoguery (or perhaps poor memory) rather than economic illiteracy.

Where is this economic calamity from immigration? If you think immigrants generally and substantially depress wages, see Bryan Caplan here, Ben Powell here, and Dave Bier here. Spoiler alert: the leading anti-immigration labor economist says the worst harm is a long-run 4.8 percent wage decline for high school dropouts; gainers include high-school graduates and those with some college education. As an economist friend says, if an unskilled Mexican who can't speak English threatens your job, you've got a bigger problem than immigration. (See more articles here. If you like video, see this.)

But back to Trump and mass deportation. The first thing to note is that it would cost a hell of a lot of money. Ben Gitis and Laura Collins of the American Action Forum write,

Depending on how the government conducts its apprehensions, it would need to spend $100 billion to $300 billion arresting and removing all undocumented immigrants residing in the country, a process that we estimate would take 20 years. In addition, to prevent any new undocumented immigrants going forward, the government would at a minimum have to maintain current immigration enforcement levels. This results in an additional $315 billion in continuing enforcement costs over that time period.

More important, however, is that Trump would need a pumped-up police state to pull off the deportation 11 million people, many of whom have been in the country, and integrated into their communities for many years. They aren't walking around wearing patches on their clothing saying, "UNDOCUMENTED." (I should be careful about giving Trump ideas.)

As Rich Cromwell writes at The Federalist, a conservative website, "The great conservative savior who wants to 'Make America Great Again' primarily plans to do so by creating vast new swathes of bureaucracy and swelling the police state."

What will Trump do when targets of deportation take refuge in sanctuary cities and churches? Will police SWAT teams or the Delta Force storm these places? That will be lovely international publicity for the USA.

And think of the violence done to families. Children born in the United States are citizens under the 14th Amendment's birthright-citizenship principle—regardless of what Trump says. (The exception are the children of foreign diplomats.) Trump threatens to deport those kids too, but it's not going to happen. His proposed violence against families and communities is a recipe for social strife fueled by bigotry. Can't you see local vigilantes offering to give the feds a hand? That's some way to make America great again.

Keeping in mind that Trump promises to deport the 11 million in less than two years and that bureaucracies are notoriously inept, Michael Strain of the American Enterprise Institute foresees the bumbling detention and even deportation of many American citizens:

Does [Trump] understand how his police state would affect the country? Apart from the obvious ways that have been much discussed — breaking up families; a massive disruption for businesses, schools, churches, communities; potentially turning neighbor against neighbor — Trump's powerful Department of Homeland Security would almost surely end up mistakenly apprehending and detaining U.S. citizens. And probably deporting some of them, too….

It's hard to imagine that pace allowing for the careful deportation hearings that might significantly lower the rate at which U.S. citizens are incorrectly deported, or allowing for care to be taken not to mistakenly detain U.S. citizens in the first place. It's much easier to imagine that pace requiring significantly more troubling, blunt methods — predicting a police state is entirely reasonable — that would be much more prone to mistakes. This timetable also drains credibility from Trump's promise that his deportation force would go about their business humanely.

Using published data on the current error rate—which would surely increase if Trump expanded deportations on such a tight schedule—Strain notes that a one percent error rate would mean that more than 100,000 Americans would be caught in Trump's dragnet. "It eclipses in number the internment of U.S. citizens of Japanese ancestry during World War II," Strain writes. Even a 0.1 error rate would mean thousands of citizens rounded up.

As noted, Trump promises the immigration roundup will be humane. At the debate he lauded the mass deportation (an estimated one million Mexicans, but likely less) during the Eisenhower administration—the shameful Operation Wetback—as the model of humane deportation.

Really? If you want to see how humane Operation Wetback was, consult Yanan Wang's article here. Hundreds of thousands of Mexicans were "dumped" in the Mexicali, Mexico, desert, where temperatures reached 125 degrees. "After one such round-up and transfer in July," Wang writes, "88 people died from heat stroke…. Among the over 25 percent who were transported by boat from Port Isabel, Texas, to the Mexican Gulf Coast, many shared cramped quarters in vessels resembling an 'eighteenth century slave ship' and 'penal hell ship.'" (The terms are from this book.)

These deportation procedures, detailed by historian Mae M. Ngai, were not anomalies. They were the essential framework of Operation Wetback—a concerted immigration law enforcement effort implemented by President Dwight D. Eisenhower in 1954—and the deportation model that Donald Trump says he intends to follow.

Ultimately the case for freedom of movement is not about the U.S. economy. It's about whether people born outside the United States will be treated like human beings or, as Trump proposes, like animals.

But didn't these immigrants violate the law? As the natural-law philosophers understood, an unjust law is not a law.