Despite some reforms, civil asset forfeiture revenues continue to grow. 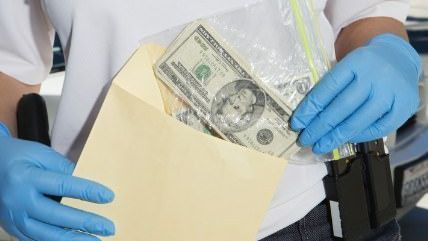 The liberty-loving legal experts from the Institute of Justice (IJ) have updated their "Policing for Profit" study from 2010 for 2015. This was the report that analyzed federal and state use of civil asset forfeiture—the system by which law enforcement agencies and prosecutors are able to seize and keep citizen property when they're suspected, but not necessarily convicted, of crimes. They've graded each state based on how well citizens are protected from abuse and how the state diminishes the profit motive by not letting law enforcement agencies keep all that they can seize.

The good news is that we've seen states like New Mexico and Michigan reform their forfeiture laws recently to reduce the possibility of abuse by law enforcement officials. The bad news is that since IJ's report from 2010, the amount of money government officials have taken from citizens has increased significantly through the use of civil asset forfeiture.

IJ reports that federal asset forfeiture revenues from the Department of Justice and the Treasury Department have grown 1,000 percent from 2001 to 2014. They've taken in more than $29 billion over that period. For the states where IJ was able to collect long-term figures (only 14 states), annual forfeiture revenue doubled from 2002 to 2014. Only 13 percent of the Department of Justice's forfeitures were criminal forfeitures—meaning somebody had been convicted of a crime. The rest were all civil forfeitures. And of those, 88 percent of those seizures happened "administratively." The property owner didn't—for whatever reason—even get to make a case that the property in question is unconnected to any crime. Some may have deliberately abandoned the property (because they knew it was drug money, for example), but defendants of this sort of seizure are not guaranteed lawyers, have to pay for their own defense, and have to navigate a complex bureaucratic process stacked against them.

Then there's the federal Equitable Sharing program at the Department of Justice. This is the federal program that allows law enforcement agencies to partner with the DOJ to seize assets and distributes up to 80 percent of it back to the local police. This system often allows law enforcement agencies to completely bypass any regulations placed by states to restrain the profit motive for law enforcement agencies by either requiring more proof before they can seize assets or permitting them to keep only a smaller percentage (or none) of what they seize. State participation the Equitable Sharing program blasted off between 2000 and 2013, zooming from $198 million in annual revenue to $643 million.

California, for example is one of the worst offenders, second only to Rhode Island. Its state forfeiture laws offer more protections to the accused and allow law enforcement agencies to keep less of the money than the Equitable Sharing program. So law enforcement agencies in California often just ignore state law and go running to the DOJ to seize property and assets. As a result, they've gotten nearly $700 million through the federal program between 2000 and 2013, but only $280 million through state asset forfeiture rules. No wonder California police and prosecutors fought tooth and nail against asset forfeiture reform that threatened this federal gravy train.

The full map interactive map from IJ is available here, and it is still looking pretty dire after five years. There are an awful lot of D-minus grades among the states (and the federal government as well for having such loose rules for seizure). Also, the IJ has produced a useful video explaining the civil forfeiture process the huge numbers involved. It's useful to share with anybody who doesn't understand how it all works. When people understand what civil asset forfeiture actually is, they tend to oppose it. Clearly, there's still a lot of education that needs to happen: