On Pot, Can We Keep Up With the Neighbors?

Canada and Mexico may beat U.S. to the punch on legalization. 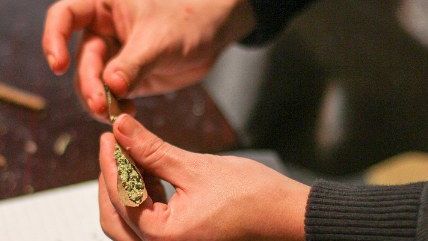 Canada was recently ranked the freest country in the world, but newly installed Prime Minister Justin Trudeau isn't about to let it rest on its maple leaves. He won the October national elections after proposing something no major American presidential nominee has ever dared to endorse: legalizing marijuana.

His Liberal Party argued that because of the current ban, "proceeds from the illegal drug trade support organized crime and greater threats to public safety, like human trafficking and hard drugs." Its platform called for legalizing, regulating and taxing cannabis.

Trudeau is now in a position to change the pot law, since he commands a majority in the House of Commons as well as agreement from small parties that hold seats. Public opinion is on his side, with 56 percent of Canadians favoring legalization. The voters favored Trudeau's party despite—or because of—his admission to smoking pot as a member of Parliament.

Our neighbor to the north, however, will have to hurry to get ahead of our neighbor to the south. On Wednesday, the Mexican Supreme Court ruled that individuals have a right to grow and consume marijuana as they please, as a simple matter of liberty.

"The responsible decision taken to experiment with the effects of this substance—whatever personal harm it might to—belongs within the autonomy of the individual, protected by their freedom to develop themselves," wrote Justice Arturo Zaldivar.

In the United States, things are moving more slowly, but in the same direction. On Tuesday, Ohioans rejected legalization even though polls indicate most of them favor the concept. This measure would have granted exclusive production rights to 10 groups of investors, which did not go over well. Even groups like the Drug Policy Alliance and the Marijuana Policy Project could not bring themselves to endorse the plan, preferring to be neutral.

Four states have already allowed recreational weed: Washington, Colorado, Oregon and Alaska (in addition to the District of Columbia). How was it worked out? In Washington and Colorado, the first to do it, public support has grown as opponents realized that their fears were misplaced or exaggerated.

Voters are likely to get the chance to decide the issue in several other states next year, including California, Massachusetts and Arizona. Vermont has a better idea. It appears poised to become the first state to legalize pot by the legislative process.

If that happens, "the dam breaks," predicts Allen St. Pierre, executive director of the National Organization for the Reform of Marijuana Laws. "Nearly all of New England will move that way," he told me. Something similar happened a few years ago with civil unions.

Speaking of Vermont, its junior senator, Bernie Sanders, has introduced a bill to end the federal ban on cannabis, which would leave the question entirely up to the states. He has also said that if he lived in Nevada, which will have a ballot measure next year to legalize pot, he would vote for it. The war on drugs, he believes, "has done an enormous amount of damage."

Those are pretty bold words for a presidential candidate. But in this case, the public has raced ahead of the politicians. An October Gallup poll found that 58 percent of Americans support legalization—a higher share of the electorate than in Canada, and up from just 36 percent a decade ago.

Decades of exposure to the drug have persuaded people that the dangers of allowing cannabis consumption are smaller than the harms caused by outlawing it. Those include enriching homicidal criminal gangs here and in Mexico, as well as damaging lives and wasting money arresting hapless stoners.

Given the choice, as it happens, most people still wouldn't smoke weed. In the Netherlands, where cannabis shops are allowed, marijuana use among adults and teens is lower than it is here.

Another harm is that prohibition deprives individuals of the liberty to decide whether the pleasures of using pot outweigh the relatively mild health risks it presents. Legalization would be a big step toward making the United States freer—you know, like some other parts of North America.