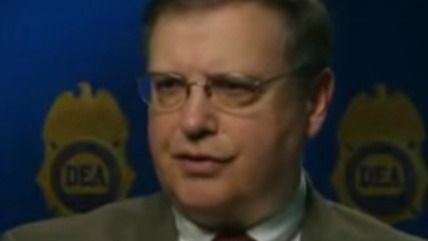 Chuck Rosenberg, acting head of the Drug Enforcement Administration, is in some respects an improvement on his predecessor, Michele Leonhart, who famously refused to comment on the relative hazards of marijuana and heroin. Rosenberg, by contrast, conceded last August that "heroin is clearly more dangerous than marijuana." This week, even as he called marijuana legalization "misguided and wrong and stupid," Rosenberg conceded that it's too early to say what the consequences will be in states such as Colorado and Washington:

Yeah, there are effects. Do we see them clearly today? No. But it's starting to come more clearly into focus. Will we start to see it clearly in five to 10 years? I bet we will.

Rosenberg even implicitly admitted that the distinctions drawn by our drug laws are arbitary. "I don't agree with it," he said, referring to legal pot. "I think it's dangerous. I don't recommend it. But there's other stuff in our society that's dangerous that's perfectly legal."

But in discussing the medical use of marijuana, Rosenberg sounded very much like an unreconstructed drug warrior in the Leonhart mold. Smoked marijuana—as opposed to "extracts or constituents or component parts"—"has never been shown to be safe or effective as a medicine," he told reporters on Wednesday, and it's "ludicrous" to treat it as such. "What really bothers me is the notion that marijuana is also medicinal, because it's not," he said. "We can have an intellectually honest debate about whether we should legalize something that is bad and dangerous, but don't call it medicine. That is a joke."

It's true that the Food and Drug Administration (FDA) has not recognized whole-plant marijuana as "safe and effective." But it approved synthetic THC (Marinol, a.k.a. Dronabinol) as a medicine 30 years ago, which means marijuana's main psychoactive ingredient is an officially recognized medicine. It therefore stands to reason that marijuana is at least "effective." As for safety, inhaling any sort of smoke poses potential health risks, but that is not the only way to consume marijuana—a fact that Rosenberg conveniently ignores. Patients can get their medicine from vaporizers that heat marijuana to release the cannabinoids without generating smoke, vape pens that do something similar with cannabis oil, marijuana-infused foods or beverages, transdermal patches, melt-in-your-mouth lozenges or strips, and oral sprays. If Sativex, a cannabis extract spray that has been approved by drug regulators in other countries and may soon be approved by the FDA, counts as a real medicine, it is hard to see why the products sold in medical marijuana dispensaries don't.

Possibly what Rosenberg means is that much of what passes for medical marijuana use is recreational use in disguise. But that issue is distinct from the question of whether marijuana can in fact alleviate bona fide patients' symptoms, which is beyond serious dispute, and whether the risks it poses are acceptable, which seems pretty clear if you compare marijuana's potential side effects to those of government-approved pharmaceuticals. Rosenberg thinks only the FDA, as opposed to patients and their doctors, should be making these judgments. Many Americans disagree, believing that people who find that a plant relieves their suffering should not have to beg the government's permission to use it. Pace Rosenberg, that's no joke.