Prescribing Patients the Drugs They Want Is Not Murder

A California doctor's conviction is bound to have a chilling effect on pain treatment. 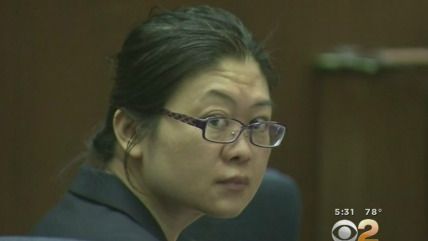 Last Friday a California jury convicted Hsiu-Ying Tseng, a Rowland Heights physician, of second-degree murder in connection with the deaths of three patients who overdosed on drugs she prescribed. Local prosecutors say this is the first time a doctor has been convicted of murder in the United States based on allegations of reckless prescribing, although a Florida doctor accused of similar practices was convicted of manslaughter in 2002.

Cases like these stretch the criminal law to cover conduct that is more appropriately addressed by the civil courts. In fact, it is doubtful that what Tseng was accused of doing—basically, too readily giving patients access to the drugs they wanted—should be considered a tort, let alone murder.

Under California law, second-degree murder requires "malice aforethought," which means the defendant acted "with wanton disregard for human life" in doing something that "involves a high degree of probability that it will result in death." Examples of second-degree murder, which is punishable by a prison sentence of 15 years to life, include killing someone by firing a gun into a crowded room or by driving while intoxicated after a DUI conviction. But unlike a reckless shooter or a drunk driver, Tseng did not actually kill anyone; at most, she provided the means by which people killed themselves.

"The message this case sends is you can't hide behind a white lab coat and commit crimes," Los Angeles County Deputy District Attorney John Niedermann said after the verdict. "A lab coat and stethoscope are no shield."

In reality, the message this case sends is that prosecutors can and will treat medical mistakes as felonies—a message that is bound to have a chilling effect on pain treatment. The defense and prosecution agreed that Tseng should have been more careful in evaluating her patient's pain complaints and more vigilant for signs of abuse and diversion to the black market. As her lawyer put it, she "could've practiced medicine better." But since pain cannot be objectively verified, even the most scrupulous doctor can easily make the mistake of trusting the wrong patient. Should that patient die from an overdose, the doctor could face criminal prosecution along with a malpractice suit or scrutiny by state regulators.

The danger of losing your liberty as well as your license and your livelihood creates a strong incentive to distrust patients. That effect is welcomed by drug warriors like Niedermann, who are keen to prevent nonmedical use of narcotic painkillers. But it comes at the expense of legitimate patients who find that doctors conscripted into the war on drugs treat them like criminal suspects instead of customers. As the Los Angeles Times notes, "Some experts worried that a conviction would have a chilling effect on worried doctors and keep powerful painkillers from patients who need them." Good cops do not make good doctors.

[Thanks to Robert Woolley for the tip.]