The Iranian government traffics in drugs and executes drug dealers. What's not to love? 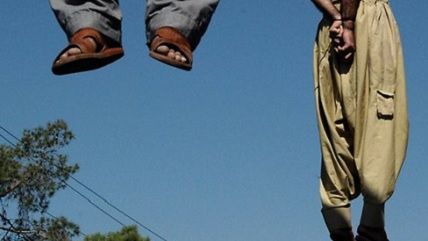 Over at Bloomberg View, Eli Lake notes that the United Nations loves the way Iran prosecutes its drug war. Even though it's not at all pretty:

Since President Hassan Rouhani's election in 2013, state executions in Iran have spiked. How could a man who promised to free political prisoners preside over this reign of terror?

It turns out part of the answer, at least, is the global war on drugs….

According to [a new] report, released by Ahmed Shaheed, the U.N.'s special rapporteur for human rights in Iran, 69 percent of the state executions of prisoners in the first six months of 2015 were for drug-related offenses. In 2014, when Iran executed 753 people (the highest total in Iran in 10 years), Shaheed said nearly half were killed for drug crimes.

There are many reasons the Iranian state detains, tortures and hangs its citizens. These range from offenses against God to publishing propaganda critical of the regime. But it's the drug dealers who are being hanged the most, according to Shaheed. "The Government holds the view that the implications posed by drug-trafficking to the health and security of the Iranian people render drug-related offences 'most serious' crimes and, therefore, they deserve to be considered capital offences," he wrote.

Lake notes a few ironies, including the small fact that Iran's revolutionary guard faction is a known narco-trafficking crew. The second is that despite the new report, the UN has showered Iran with love specifically for the way it fights the scourge of drugs:

Iran has been widely praised by the United Nations Office on Drugs and Crime as a model partner in the war on drugs. The office had even proposed a five-year aid package for Iran's anti-drug efforts….As recently as June, the U.N. drug office's representative in Iran generally praised Tehran's efforts to combat narco-trafficking. He repeated the state's line that its police had paid a heavy price in fighting the drug dealers.

So the Iranian government, soon to be given a seat at peace talks about the Syrian civil war it has helped to prolong and intensify, is being praised for battling a drug trade that it also facilitates. What a terrible world.