Ben Carson Wants to "Intensify" the War on Drugs

The Iowa frontrunner is spoiling for more drug war. 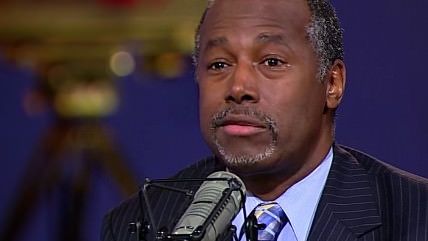 Presidential contender Ben Carson told Glenn Beck that he wants to "intensify" the war on drugs.

Robby Soave blogged Carson's controversial remarks about using the federal Department of Education to eradicated political bias from the academy yesterday, but elsewhere in the same Blaze interview (starting at about 1:30) the brain surgeon/book writer/Iowa poll leader reiterated his intention to double down on drug prohibition:

Beck is conducting a lightning round of questions. He asks Carson:

Beck: Do you continue the war on drugs?

Carson: I would intensify it.

(Reason readers may recall that our own Jacob Sullum helped usher the talk show personality onto the anti-prohibition bandwagon earlier this year.)

Then, bless his besweatered heart, Beck drops a wee, snarky little pause on the candidate and then follows up:

Beck: Let me ask you a question… <incredulous pause>

Beck: How… <more pausing to think of a nice way to phrase the question>

Beck: I mean, it doesn't seem to be working now.

Carson: Yeah well, go down to the border in Arizona like I was a few weeks ago. I mean, it's an open highway and the federal government isn't doing anything to stop it.

Beck then asks the candidate if he would legalize marijuana and Carson replies "I disagree with it." He has previously said that he considers pot a "gateway drug."

This concludes today's harshing of your buzz.

P.S. Tune into Kennedy on Fox Business tonight to hear me talk about this, Benghazi, the Kardashians, and much, much more.