Says Trump "engaged in crony capitalism in its most raw and abusive form." 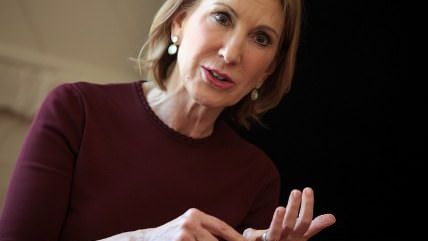 Last week Republican presidential candidate Carly Fiorina appeared on The Federalist Radio Hour for a discussion about politics and the 2016 White House race. In response to a question posed by fellow guest Betsy Woodruff of the Daily Beast, Fiorina had the following to say about Donald Trump's recent glowing endorsement of Kelo v. City of New London, the Supreme Court's controversial 2005 ruling on eminent domain:

I think Donald Trump, among others, has engaged in crony capitalism in its most raw and abusive form. When commercial interests get together with government to take away private property for their own commercial interests, that's a big problem. And I think I join so many conservatives in saying that eminent domain has been abused. And it has been abused by the collusion between governments eager for revenue and businesses eager for competitive advantage. So I find the Kelo case—if ever there was a case for judicial engagement instead of judicial restraint, it's this set of issues.

Fiorina is exactly right. In 1994 Trump got together with government officials in Atlantic City, New Jersey, in a shameful attempt to seize the home of an elderly widow in order make room for a limousine parking lot for the Trump Plaza hotel and casino. It was a textbook example of eminent domain abuse and "crony capitalism in its most raw and abusive form."

Fiorina is also right about Kelo. According to the author of that regrettable decision, Justice John Paul Stevens, "Kelo adhered to the doctrine of judicial restraint, which allows state legislatures broad latitude in making economic policy decisions in their respective jurisdictions." Thanks to Stevens' judicial restraint, Connecticut officials got the green light to bulldoze a well-tended working-class neighborhood on behalf of a speculative redevelopment scheme that turned out to be an utter failure. As Fiorina correctly observed, the Supreme Court should have enforced the terms of the Constitution in that case, not bent over backwards in deference to the government.