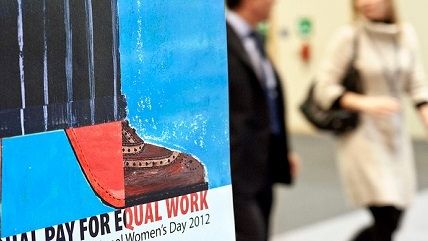 I have no idea what other columnists at my newspaper earn and have absolutely no interest in that information, even if someone suggested that pudgy, older bald guys with big noses and Philadelphia accents might get short shrift. If I don't like the deal, I'm free to go elsewhere. If the newspaper doesn't like my work, it can hire someone else.

Human-resource managers call it the "at will" hire concept. Really, it's the "free society" concept. Increasingly, that idea is giving way to the "hire a lawyer" or "file a grievance" concepts. The new California Fair Pay Act signed by Gov. Jerry Brown (D) this week is one of the toughest gender-equality measures in the country, but critics say it turns everyone's salary into a potential dispute.

I understand how tough it can be to just find another job, but pay levels are the result of myriad factors ranging from experience, negotiating skills, timing and more. The new law allows employers to use bona fide differences to justify different wage rates, but it is clear the new measure will subject pay differences to endless litigation.

California has long required employers to pay men and women the same wage for the same work. SB 358, however, expands the standard from "same" to "substantially similar."

It's problematic enough to measure the same work. Is Reporter A with 15 years of experience the same as Reporter B with 10 years? What if B spent those years at a big-city newspaper and A spent it at a backwater? But A was the star at Backwater Times and B was a seat warmer. I know. The law is about current job requirements, not past experience. But I've done enough hiring to know jobs expand or shrink with the talents of those who perform them—and not just for salaried jobs. Companies often bid more for talent—and less-experienced workers get a foot in the door by accepting lower pay.

The new standard puts everything up for debate. It forbids differing wage rates for people of the opposite sex "for substantially similar work, when viewed as a composite of skill, effort and responsibility, and performed under similar working conditions," according to the Senate bill analysis. It leaves exceptions if the wage differential is from seniority systems, merit systems and systems where earnings are based on "quantity or quality of production." In other words, there are enough "outs" to minimize the disruptions.

We all want fairness and equality, but people aren't widgets stamped out equally on an assembly line. My wife works and I have three daughters. My mom tells stories about being the only woman in a male-dominated sales environment. I get it. But is the best way to assure fair pay to subject everything to a lawsuit or hearing in front of administrative number-crunchers?

The law reads as if it were written by trial lawyers. "Substantially similar" is vague language that can only be resolved in court. Existing law bars an employer from banning employees from disclosing their salaries to others. This new law forbids employers from barring their workers from "discussing the wages of others, or inquiring about another employee's wages" if the goal is to enforce the rights in the bill. It's an open invitation for disgruntled employees to try to ferret out information about their co-workers' earnings, complain about discrepancies and start filing grievances. Don't try laying off a worker with a grievance. That opens the door to expanded lawsuits that allege retaliation. Do consider hiring more lawyers.

"Sixty-six years after passage of the California Equal Pay Act, many women still earn less money than men doing the same or similar work," said Gov. Jerry Brown. The law's backers say that women on average earn 77 cents on the dollar, which seems pretty unfair. But others argue the gap shrinks once crucial factors (job type, time on the job, education, age) are included in the formula.

There wasn't much debate on that valid issue, or on the costs imposed on businesses. That's because Republican leaders eagerly signed on to the bill and only two GOP legislators voted no. The California Chamber of Commerce got some concessions and then backed it. If pro-business voices don't care, maybe the rest of us shouldn't, either. But I still don't think hiring a lawyer is the best solution if your pay level seems unfair.