You Say You Want a Ukrainian Revolution?

The director of 'Winter on Fire: Ukraine's Fight for Freedom' talks with Reason TV. 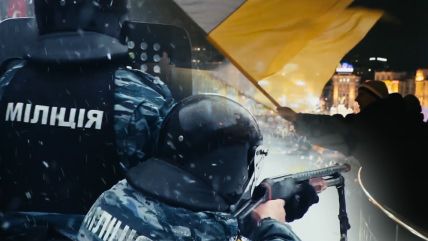 Need a weekend Netflix recommendation? You can hardly beat a real-life revolution for high-stakes drama, and the new film Winter on Fire: Ukraine's Fight for Freedom goes live on the streaming service this weekend.

Watch Reason TV's Nick Gillespie interview with the film's director and check out the original writeup below:

"No one was expecting to have kids beaten at 4 o'clock in the morning. No one was expecting people to be kidnapped or killed. It was just unfolding," explains Evgeny Afineevsky, director of the film Winter on Fire: Ukraine's Fight for Freedom, which documents the 93 day uprising that led to the downfall of president Viktor Yanukovych. The film, which recently won the People's Choice documentary award at the Toronto International Film Festival, will be debuting on Netflix on Oct. 9th. "We were just trying to capture every moment and document everything. All of a sudden I was in the middle of this uprising and I was capturing the history."

Afineevsky's film, which he calls "a cinematic monument" to the heroes of the Ukrainian revolution, is a sympathetic portrait of the conditions and actions of the protesters fighting against a corrupt regime and for closer ties to the European Union. While some reviews have criticized the singular viewpoint of the movie, Afineevsky defended his vision during a recent interview with Reason TV's Nick Gillespie.