Donald Trump's Gun Platform: Some Good, But Bad on "Mental Illness" and Federalization of Crime 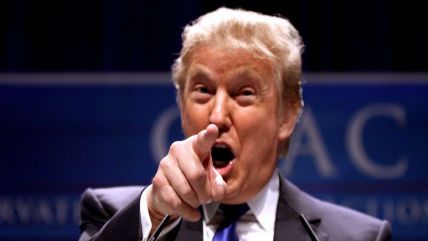 Shifting himself slowly from unhinged id to "real politician with ideas and positions on public policy issues of the day and all that crap," Donald Trump's campaign has released a brief, long op-ed length position paper on where he stands on guns and the Second Amendment. It's not terrible, though far from perfect, sort of what you might expect from the average NRA member.

It begins with a bold declaration that, like the U.S. Supreme Court in interpreting the Constitution, he later backs down on: "The Second Amendment to our Constitution is clear. The right of the people to keep and bear Arms shall not be infringed upon. Period."

Then, some sops to the idea that a pro-gun politician has to show how serious he is about crime by being extra tough on any crime committed with a gun. He weirdly blames "the Obama administration" for local crime and local law enforcement decisions in "Baltimore, Chicago" and other cities" and calls for federally imposed mandatory minimums on crimes committed with guns, as per the old Richmond, Virginia, "Project Exile" which would, like all mandatory minimums and federalization of street crimes, doubtless lead to unnecessary injustices.

Trump admits the gun possession is not just a sporting thing but about self-defense, and after hat-tipping to the supposed value of cops says, correctly, "they can't be everywhere all of the time. Our personal protection is ultimately up to us. That's why I'm a gun owner, that's why I have a concealed carry permit, and that's why tens of millions of Americans have concealed carry permits as well. It's just common sense."

Trump then emulates too many Second Amendment defenders by shifting blame and unjust law enforcement from guns onto some other thing that seems handy, in this case the mental health system and the mentally unhealthy.

He insists that if only we paid attention to "red flags" (that don't rise to the level of actual crimes) and pre-emptively locked up people for curious behavior that only in retrospect is ever any kind of clear sign of "about to kill people with a gun" than all would be fine.

Jacob Sullum explained most recently how untrue on every level that is last month after the Roanoke shooting. That stance also shows no real respect for the Second Amendment that Trump puts his "period" after above. Even the vast majority of those who have actually been adjudicated "mentally ill" in some fashion would never harm anyone else with a weapon they owned, and there isn't any obvious reason why they should be denied the right to self-defense or pleasure via gun ownership of anyone else.

For those who merely evince some sort of vague "red flag," pre-emptive extra-judicial locking up and Second Amendment violation sounds like "common sense" but arises from the same mentality that makes gun-grabbers think no one deserves to have a weapon.

Trump goes on with sensible proscriptions against specific type of gun or magazine bans, defends the current background check system but is against expanding it beyond licensed gun dealers, and calls for cross-state reciprocity on carry permits. Plus, allowing military on bases and recruiting centers to carry firearms, a side issue but one with great GOP resonance.

So, not perfect but good in many respects, a Second Amendment platform likely carefully designed to appeal to a modal NRA-sympathetic Republican primary voter. It fails for hardcore Second Amendment devotees who approach it from a libertarian perspective, not a "common sense safety" one.

Now if only anything about Trump's temperament or deportment make me believe the good parts are stances he'd stick to or move forward as president in any meaningful way. I'm willing to bet he'd push the bad stuff (more federalization of gun crime, more locking up or Second Amendment denial to people who've committed no crime) more than he'd stand strong on making sure Congress doesn't get away with doing the bad stuff he says he's against.