American Egg Board paid for pro-egg press, advised Hellmann's Mayo to contact the FDA about its eggless competitor. 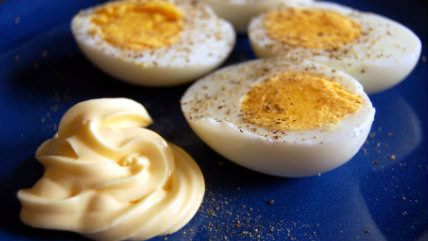 So Quartz might be overstating it slightly with the headline "There is literally a U.S. government conspiracy against vegan mayo." But emails uncovered by Massachusetts Institute of Technology researcher Ryan Shapiro do show that the American Egg Board (AEB)—an egg promotion group with members appointed by the U.S. Department of Agriculture—hired public relations professionals to help bring down vegan-mayo maker Hampton Creek, and advised the bigwigs behind Hellmann's mayonnaise to report the California startup to the Food and Drug Administration (FDA).

In August, the FDA sent a warning letter to Hampton Creek about possible "misbranding." Among the FDA's complaints: Hampton Creek's "Just Mayo" line doesn't meet the legal requirements for labeling something mayo. Only products containing vegetable oil, eggs, and vinegar and/or lemon juice may use the term, providing they don't stray beyond these and a few additional ingredients, like salt and sugar. The lack of eggs and presence of beta-carotene and pea protein puts Just Mayo at odds with federal condiment rules.

Consumers, however, seem to be digging the blasphemous mayo; Hampton Creek sales are on the rise, and Just Mayo has won placement in national chains such as Target and Costco. Threatened, the American Egg Board tried to sabotage Just Mayo sales in various ways, according to the Associated Press. Internal emails from the board "offer a sometimes comic glimpse into the alarm the egg group felt about the startup and its CEO, Josh Tetrick, who has said he wants to make the food system more environmentally friendly by replacing the eggs in an array of foods with plant-based alternatives," notes AP food writer Candace Choi.

Though the board tried to avoid referring to Just Mayo in public—one email likens doing so to Hillary Clinton debating some "little-known, left wing" Democrat—private correspondence between board members and Edelman PR execs reveal Big Egg was worried about the love Hampton Creek received from investors (including Bill Gates) and the media.

In one email to Edelman staff, Egg Board President Joanne Ivy writes "I am feeling this is turning into a crisis!" In another email, Ivy asks Roger Glasshoff, the Agriculture Department's former National Supervisor of Shell Eggs, how to make a complaint to the FDA about Just Mayo. AEB projects included paying bloggers to write about the health benefits of eggs and plotting (unsuccessfully) to keep Hampton Creek products off of Whole Foods shelves.

Ivy told the Associated Press that AEB was just doing the kind of due diligence that's "common within the consumer products industry." Yet AEB's status as a quasi-governmental organization—one of several gov-lite groups tasked with promoting particular food-industry interests—makes this activity questionable. The American Egg Board is supposedly limited by law to merely promoting egg consumption, not trying to take down vegan competitors. It's also supposed to avoid attepts to influence governmental policy or action, to disclose if it pays for positive egg publicity, and to stop short of depicting other commodities "in a negative or unpleaseant light."

"The USDA did not respond this week as to whether the egg board overstepped its mission by trying to stop the sale of a potential competitor," AP reports. Hamton Creek's CEO said the company may ask Congress to investigate potential violations by the Egg Board.

There's evidence AEB's rotten behavior may indeed be related, at least tangentially, to Just Mayo's current FDA situation. In one internal email from November 2014, Ivy mentions chatting with a lawyer for Unilever, the company behind Hellman's mayonnaise, which was then suing Hampton Creek for false advertising. "I believe I provided (the lawyer) with some basic information that was helpful, but let him know that AEB cannot make statements that would support Unilever's position," Ivy wrote.

In another email, Ivy mentions strategizing with Unilever's lawyer about potential spokespeople the foodmaker could get "to talk about the benefits of real egg." She also notes telling him to "make sure that FDA is aware to address this situation. I feel sure they are aware, but maybe they need to be pushed." In December 2014, Unilever dropped the Hampton's Creek suit and said they would leave the matter up to regulatory authorities.