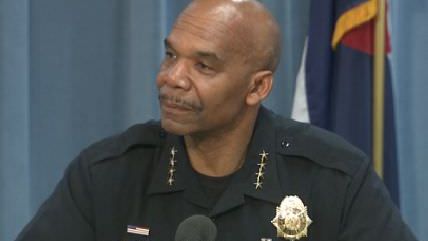 In recent weeks, as I've noted here, Denver police have arrested two local activists, Mark Iannicelli and Eric Brandt, for exercising their First Amendment rights by passing out pamphlets about jury nullification in front of the Lindsey-Flanigan Courthouse. Yesterday two other activists, joined by the Fully Informed Jury Association (FIJA), asked a federal court to issue an injunction against this unconstitutional harassment, which they say has had a chilling effect on their plans to distribute the same literature in the same place. "It is hard to conceive of a bigger deterrent to free speech than the threat of immediate arrest, prosecution and incarceration," says Denver attorney David Lane, who also represents Iannicelli and Brandt, in his motion for a preliminary injunction, which names Denver Police Chief Robert White and the city and county of Denver as defendants. "The Defendants presently before this Court are attempting to do what oppressive governments have sought to do from time immemorial: suppress ideas they find unpalatable."

Denver District Attorney Mitch Morrissey charged both Iannicelli and Brandt with seven counts of jury tampering, a felony punishable by one to three years in prison. That offense consists of attempting to "communicate with a juror" outside of judicial proceedings with the intent to influence the juror's "vote, opinion, decision, or other action in a case." Yet neither Iannicelli nor Brandt is accused of trying to influence the outcome of any specific case. All they did was distribute general information about the rights of jurors, especially the right to judge the law as well as the facts of a case. The seven counts of jury tampering are based on nothing more than pamphlets received by seven jury pool members.

"The Defendants are using the Jury Tampering statute as an excuse for squelching free speech," Lane writes. "The Defendants are fearful that the message of jury nullification may take root in the minds of sitting jurors who would then ignore the instructions of a court and acquit criminal defendants despite their having been proven guilty at trial beyond a reasonable doubt."

The arrest affidavits for Iannicelli and Brandt both mention that a death penalty case was under way at the courthouse on the day they passed out FIJA pamphlets: Dexter Lewis was on trial for stabbing five people to death at a Denver bar in 2012. But there is no evidence that either man knew about the trial, let alone that they were trying to affect the outcome. "They weren't talking about any particular case, and they didn't even know the Dexter Lewis case was in the building," Lane told Westword. "They'd never heard of the Dexter Lewis case. They were giving this literature to anyone who was walking by, educating people about various rights and powers they have. And that's all they were doing."

In his motion, Lane notes that the one federal ruling to address the propriety of punishing people for such activity warned that a broad definition of jury tampering "could raise First Amendment problems because of its potential to chill speech about judicial proceedings." In that case, U.S. District Judge Kimba Wood threw out a jury tampering indictment against Julian Heicklen, a New York City activist who did almost exactly the same thing that Iannicelli and Brandt are accused of doing. Wood said First Amendment concerns require a distinction between "efforts to influence the outcome of a case" and "the broad categories of journalistic, academic, political, and other writings that discuss the roles and responsibilities of jurors in general."

The chilling effect that Wood foresaw is happening right now in Colorado. The two activists seeking the injunction, Eric Verlo and Janet Matzen, would like to pass out FIJA pamphlets at the Denver courthouse but are understandably worried that they will be arrested if they do. According to the complaint filed by Lane, "FIJA intends to hold an educational campaign in Denver on September 5, 2015, where its members wish to pass out the same brochures on the Lindsey-Flannigan plaza as Eric Brandt and Mark Iannicelli were passing out, which caused them to be arrested."

Lane notes that the plaza outside  the courthouse "is commonly used for other peaceful protests and demonstrations." By singling out jury nullification activists for proscription and punishment, he says, the city and county are engaging in "de facto prior restraint" that censors speakers based on the views they express. "It is plain that Plaintiffs have a fundamental First Amendment right to express and explain their views in a public forum, and that citizens and passersby have a constitutionally protected right to peaceably assemble to hear those views, and to express their views in agreement or dissent," says the motion. "The First Amendment requires that the Defendants must allow the public forum to be used by Plaintiffs, notwithstanding the likelihood that Denver officials will disagree with the message being stated, notwithstanding the possibility that some who hear his speech may be made uncomfortable by it, and even assuming that some listeners may respond inappropriately or disruptively."