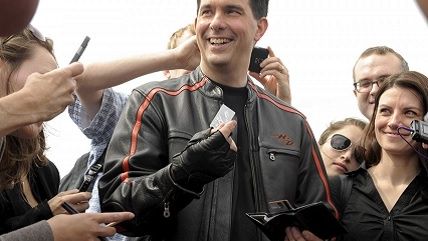 This one involves Gov. Scott Walker of Wisconsin, who's running on his tough-as-nails budget-cutting credentials. Come tomorrow, Walker will commit no less than $400 million of taxpayer money to a stadium deal to keep the NBA Bucks in Milwaukee:

The state would put $250 million toward the arena, with interest adding up over decades. The subsidy, approved last month with bipartisan support in Wisconsin's Republican-controlled legislature, wasn't addressed in the first presidential debate Thursday. That might change in future forums—or attack ads.

That's bad enough, of course. But what makes the situation even worse is that Walker is actually trying to sell it as something other politically motivated corporate welfare of the basest sort:

Walker, 47, argues that the subsidy is a "good deal," partly because Wisconsin would lose revenue if the Bucks leave, as they had threatened. The owners of the Bucks, a team whose value Forbes pegged at $600 million, will pick up half the cost of the $500 million arena.

You got that? A business worth $600 million doesn't have the cash or the credit to build its own damn palace (despite covering just half of costs, the Bucks will get virtually all revenue generated by venue forever and ever amen).

The plain fact is that professional sports teams do not increase economic activity, especially when they play in taxpayer-financed stadiums. As Dennis Coates and other economists have shown, pro sports teams are generally a net drag on local economies because they suck so hard at the public teat. Coates and a colleague found that on average, residents of cities with major sports franchises have about $40 less per capita income that folks lucky enough to live in pro-sports-free zones.

Walker's plan was denounced by the Koch-brothers-backed Americans for Prosperity and a wide range of other groups who prefer not to see economics bent to political expediency.

"How does [Walker] explain it to undecided or Republican primary voters?" asks Kenneth Mayer, a University of Wisconsin poli-sci prof. The short answer: He doesn't, any more than he explains his late-breaking conversion in favor of ethanol subsidies.

Record numbers of people think that politicians are full of shit. This sort of deal, especially when coming from somebody who claims to be a brutal cost-cutter and tough guy, is one of the many reasons for that. A Republican who lays down for wealthy businesses while bossing around the poors (recall that Walker not so long ago floated the unconstitutional idea of making welfare recipients piss into cups despite high costs and no clear benefit) is a cliche that never goes out of fashion.

For a thorough understanding of how Walker plays fast and loose with cronyism via a pile of money known as the Wisconsin Economic Development Corporation, read Peter Suderman's profile from the July issue of Reason. A snippet:

Walker [claims] that "in the areas where government has an appropriate role to play…taxpayers not only deserve but should expect and demand that government carry out its functions exceptionally well." The WEDC is technically not a government agency, but it was created by government, funded by taxpayers, and overseen by elected officials—with Scott Walker chief among them. It is hard to make a case that the WEDC has functioned well, let alone exceptionally.

Reason TV recently asked the question: "Sports Stadiums are Bad Public Investments. So Why Are Cities Still Paying for Them?" (Spoiler alert: BECAUSE IT'S NOT THE POLITICIANS' MONEY!). Take a look, why don't you?