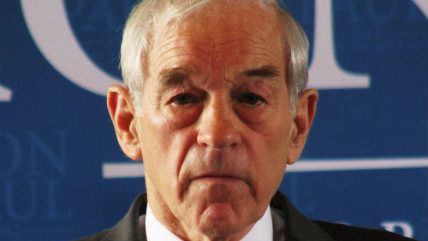 This summer, presidential candidates from Hillary Clinton to Ben Carson have been taking heat for uttering the phrase "all lives matter," which many interpret as a way to diminish the "black lives matter" movement's concerns. Now former presidential candidate Ron Paul has put a new spin on appropriating the slogan. In an August 2 column on his website, Paul suggests that activists against police brutality, bias, and militarization should focus more on stopping black women from getting abortions.

Oof. It seems at best tone-deaf and at worst totally fucking insulting to compare the killing of black adults by armed (and unaccountable) government agents to the abortion of embryos and fetuses by the women whose bodies are hosting them. Surely even those who think these women murderers see a difference between their actions and those of, say, Darren Wilson or George Zimmerman, no? I know the most ardent pro-lifers don't assign different moral weight to killing an insentient 3-week-old embryo that can't survive outside the womb and killing grown adults with full lives, feelings, and families, but even among the anti-abortion crowd that's a pretty minority view.

Not content to compare pregnant women with racist cops, however, Paul also suggests that they're closet eugenicists. "Planned Parenthood may have abandoned the explicitly racist and eugenic views of its founder Margaret Sanger," writes Paul, "but the majority of its abortion "services" are still provided to lower-income and minority women. Every day nearly 2,000 African-American babies lose their lives to abortion, a rate five times higher than the Caucasian abortion rates."

Paul is right that the majority of Planned Parenthood patients are low-income and minority women, because these are clinics for low-income women, and in this country that includes a lot of minorities. Wealthier and whiter women are also terminating pregnancies, they just go to different places. They also don't have as many abortions, in part because they tend to have better access to preventative measures (like birth control and sex education) and, should an unintended pregnancy occur, are more likely to have things that make parenting seem feasible, such as money and stable employment.

Myriad studies have shown that most people who have abortions do not come to regret the decision. (It turns out women are pretty good at figuring out for themselves whether they have the financial, emotional, and other resources to raise a child and whether abortion fits within their personal moral framework.) So if a few thousand black women are choosing to terminate their pregnancies each day, I trust that that it's the right decision for a few thousand black women in this country each day. It is not Planned Parenthood creating this need, it is things like poverty, lack of contraception access, sexual norms, the fallibility of birth control, and any number of things rooted in the realities of individual women's circumstances. But by Paul's logic, these black women are acting like eugenicists by putting themselves (and any already-existing children of theirs) before the welfare of "unborn black lives."