A School Cop Handcuffed an 8-Year-Old Boy's Arms Behind His Back. That's Not Okay. 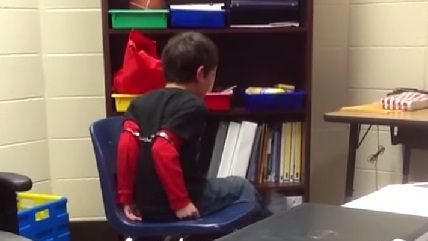 One of the worst examples of a school treating mild misbehavior as dangerous criminal conduct comes to us from the American Civil Liberties Union, which has filed suit against a Kentucky school that allowed an officer to handcuff an 8-year-old boy and 9-year-old girl.

I use the word handcuff, but the better description would be shackle. The boy, at least, had his biceps restrained, rather than his hands, as is evident in this video. The cop—a school resources officer for Covington Independent Public Schools—can be seen telling the kid "you don't get to swing at me like that." Once shackled, the boy cries and complains that the restraints are hurting him.

Both children suffer from learning disabilities, according to The Huffington Post. In the ACLU's view, that makes this an affront to the Americans with Disabilities Act:

"As a result of being subjected to unnecessary and excessive handcuffing, Plaintiffs experienced pain, fear, and emotional trauma, and an exacerbation of their disabilities," the lawsuit reads. The complaint alleges violations of the U.S. Constitution and Americans with Disabilities Act.

Colonel Pat Morgan, a spokesman for the Kenton County Sheriff's Office, told The Huffington Post that he was waiting for their attorneys to review the lawsuit before providing comment.

I don't know whether the officer's conduct violates the Americans with Disabilities Act. It does appear to violate Kentucky law, which specifies that restraints shouldn't be used on children, according to CNN.

But such treatment of a child is cruel, and wrong, regardless of whether the child has a learning disability, and regardless of what the law actually states. No 50-pound boy is enough of a physical threat to a police officer that shackling his biceps behind his back is justified. School isn't prison, and children aren't inmates.