Marijuana Taxes and Restrictions Recreate Prohibition by the Back Door

As marijuana is being legalized around the country, control freaks try new ways to control. 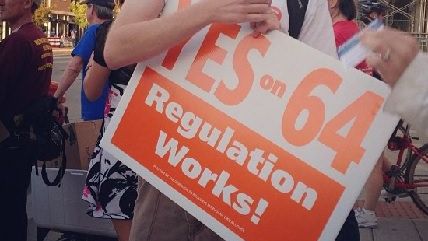 Are you a government official who yearns for the good old days of marijuana prohibition? Do you feel out of place in an era of voter-approved legalization, grow clubs, and pot shops? My, how the world has changed! But you can feed your nostalgia for busts and streetcorner deals even while "respecting" the public's desire to legalize the stuff. All you have to do is pile so many taxes and regulations on the now officially sanctioned product that it's still cheaper and easier for people to buy their dope on the black market. Everybody wins!

Well, maybe the only real winners are drug warriors nostalgic for the days when they had more power to boss people around, and their best frenemies, the underground dealers who know that money can be made with scales and grow lights when the "open" sign is lit on the black market.

And the warriors and dealers are doing just fine despite legalization.

After decades of reefer madness, with narcs chasing stoners (all in good fun unless it's your door getting kicked in or your kidneys stomped) recreational marijuana is now legal in Alaska, Colorado, Oregon, Washington, and Washington, D.C. Well, it's legal-ish. Just days after voters in the nation's capital approved Initiative 71, city officials responded with strict limits on where and when the stuff could be enjoyed. The U.S. House doubled down by slipping a two-year moratorium on pot sales in the federally dominated District into the budget bill.

Which illustrates the important fact that "legal" and "illegal" aren't always concepts in opposition to one another. All too often, they're just points on a spectrum. Something can be banned, with the law so ignored that people forget it's there. And something can be permitted, but so restricted that everybody gets warm and fuzzy accolades for reform while underground business remains the only practical access.

All four of the jurisdictions nominally backing off marijuana prohibition are having trouble making a clean break with restrictions. Which is why the warriors and dealers are doing just fine.

Alaska's main problem isn't of its own making—it's an imposition by the feds that distorts the marijuana market everywhere. That's the effect of financial restrictions that threaten dire consequences for financial institutions that open bank accounts or process payments for marijuana businesses. Facing shifting public opinion on the drug issues, the feds have promised to enforce the law with restraint—but without actually changing the rules. With fines and prison as the prize for bankers who guess wrong as to the limits of federal mercy, refusing to work with marijuana businesses remains the safest route.

"The federal government says right now it won't prosecute businesses who take marijuana-related deposits in states where it's legal," Sarah Melton, legal counsel for Denali Alaskan Federal Credit Union, told the Alaska Journal of Commerce. "But what happens in 2016 when there's a new administration? And what's to stop the federal government from just prosecuting banks anyway? They could."

"[S]tate marijuana commerce will stay as black a market as bootlegged rum during Prohibition until banks find ways to operate under restrictive financial laws," notes the Alaska Journal of Commerce. For now, businesses deal entirely in cash, or illegally bank through fake names or cut-outs.

Still, Alaska's (and other states') banking woes are kid stuff compared to the roadblocks Washington officials threw in the way of enjoying marijuana after voters stuffed legalization down their throats. With a 37 percent excise tax on marijuana sales (actually down from an old 25 percent tax on each step of production and sale) and a strictly limited number of stores confined to inconvenient locations, the state has achieved an impressive result: a legal industry that is entire uncompetitive with the illegal trade it's supposed to replace.

When I sold marijuana many years ago, I delivered to customers. It was a nice added value that built relationships and kept the business coming. I'll make the crazy assumption that Washington dealers discovered that little trick longer ago than I did.

But Washington pot smokers who want to enjoy the new legal market have no access to such convenience. Instead, notes KIRO radio, "they need to drive to one of the 161 legal pot stores across the state, which are generally restricted to areas outside of main, accessible shopping districts." And the excise tax guarantees that the price is through the roof. As a result, "making the switch to legal pot requires serious dedication."

Needless to say, black market dealing continues to thrive in the state.

Colorado's underground marijuana market also thrived, partially because of taxes, even when the state's take from a specific marijuana levy was "only" 10 percent (on top of a 15 percent excise tax and 2.9 percent sales tax). Once again, legal prices were higher than those from off-the-books dealers. State lawmakers had the good sense to drop the rate to 8 percent—though not until 2017. Dealers also must be licensed "and that can cost tens of thousands of dollars," PBS reported last year.

The delayed tax drop will no doubt be welcomed by Colorado's smokers, but it won't lower barriers to entering the official industry—which is likely to keep the parallel one humming along very nicely so long as customers keep looking for bargains.

Officials in Oregon, where legal sales begin October 1, apparently got the memo about high taxes being a tad counterproductive. Whether they fully understood it is another matter. In an explicit effort to avoid fueling the black market, lawmakers just passed a marijuana tax deliberately set lower than that in Colorado and Washington—at 17 percent. A bit of legislative messiness, however, has the rate going from zero this year, to 25 percent next year, before dropping to the "permanent" amount.

That won't be too confusing.

Sales will initially be permitted from existing medical dispensaries before retail operations are established. With 310 dispensaries currently operating, far outnumbering the pot shops licensed in Washington, and a somewhat lower tax rate, the state may be better positioned than its neighbors to discover just what it takes to separate marijuana fanciers from their long-time suppliers.

Though I'm willing to bet that 17 percent, plus 3 percent for local governments, is still too high.

Oregon dispensaries, incidentally, already find it difficult to compete against the black market in hash oil. A combination of taxes and licensing fees makes them uncompetitive.

"We're barely surviving," Amy Zimmerman, owner of 1st Choice Cannabis in Salem, told the Statesman-Journal. "It's $4,000 a year to the state, and $4,500 was my city fee. Not to mention my business insurance, my payroll taxes—it's ridiculous."

Arguably, the marijuana market is a new one in this country, relegalized after decades in the shadows, and with our last above-ground experience predating a popular taste for the stuff. Officials need time to experiment and find out what works.

But marijuana isn't really all that unique a product. It's a substance that people consume because it makes them feel good. And it's a product (or range of products) disapproved of by many politicians and pundits for reasons both puritanical and presumptous. The market for marijuana, and policy toward it, closely resembles the treatment of both alcohol and tobacco. And our experience with those markets provide valuable lessons for anybody who cares to pay attention.

Booze and cigarettes are also products that are nominally legal, but subject to restrictive regimes and high taxes by the powers that be. The confused goal in those cases, as with marijuana, is to simultaneously fill government coffers while inconveniencing and punishing people who entertain disfavored vices. The ultimate result is "prohibition by price," as Michael LaFaive of Michigan's Mackinac Center for Public Policy describes the high tariffs on cigarettes.

As with actual prohibition, official intent to discourage consumption accomplishes nothing of the sort. Whether through a ban or by excise impositions and licensing laws, attempts to choke off the official market just invigorate the black market. Black market cigarettes dominate the trade in high-tax states in this country (and around the world). Liquor smuggling is an equally booming business in places like Michigan, where governments restrict trade and hike prices.

For what gain? Britain's Institute of Economic Affairs reported in 2012 that high alcohol taxes don't discourage drinking anywhere they looked on the planet.

Why would the experience with marijuana be much different from that with alcohol and tobacco?

Yes, officials nostalgic for those lost days of official prohibition are doing their best to recreate the ban by the back door. Drug warriors and underground dealers alike will enjoy the perfectly predictable host of consequences.

The rest of us will have to decide whether the legal market is really all that preferable to the illegal one. Stay on your toes. Lots of officials think pot is underregulated.