Obama Agrees With Rand Paul That Mandatory Minimums Should Be Abolished

The president joins the Kentucky senator in calling for sentencing reform. 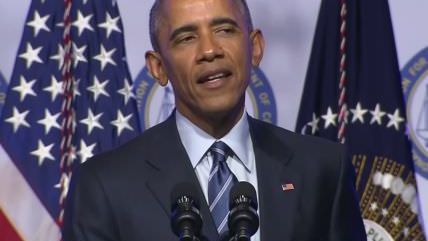 "For nonviolent drug crimes," President Obama said in a speech on criminal justice reform yesterday, "we need to lower long mandatory minimum sentences or get rid of them entirely." That position is similar to the one taken by Sen. Rand Paul (R-Ky.) in 2013, when he told the Senate Judiciary Committee, "I am here to ask that we begin the end of mandatory minimum sentencing."

Of the various sentencing reform bills before Congress, the Justice Safety Valve Act, which Paul and Sen. Patrick Leahy (D-Vt.) introduced that year and reintroduced last February, is the only one that would effectively abolish federal mandatory minimums. Paul and Leahy's bill leaves the penalties on the books but allows judges to depart from them in the interest of justice, which makes them suggestions rather than mandates.

During his speech, which he delivered at the NAACP convention in Philadelphia, Obama praised Paul for his work on criminal justice reform, which also includes legislation aimed at restoring voting rights to people convicted of felonies, expunging criminal records, equipping police with body cameras, and imposing limits on civil forfeiture.  "To his credit, he's been consistent on this," Obama said.

The president has been somewhat less consistent. Obama criticized excessively harsh sentences as a state legislator and as a candidate for the U.S. Senate, and while running for president he decried the racially disproportionate impact of mass incarceration. But after he moved into the White House, he seemed to lose interest in the issue, with the notable exception of signing a 2010 bill that reduced crack cocaine sentences. His remarkably stingy clemency record during his first term reinforced the impression that he had put criminal justice reform on the back burner, assuming it remained on the stove at all.

That began to change last year, when Obama and then-Attorney General Eric Holder repeatedly decried the injustices wrought by mandatory minimums. Their rhetoric was accompanied by modest steps toward correcting those injustices, including new charging instructions for federal drug defendants and a sudden interest in commutations. This week Obama more than doubled his commutation total in a single day, shortening the sentences of 46 nonviolent drug offenders.

"In far too many cases, the punishment simply does not fit the crime," Obama said yesterday. "If you're a low-level drug dealer…you owe some debt to society. You have to be held accountable and make amends. But you don't owe 20 years. You don't owe a life sentence."

Obama and I have different ideas about the appropriate sentence for someone whose only crime is engaging in consensual transactions with other adults. But we both agree that 20 years is too long. Now that he has belatedly turned his attention to this issue, I hope he can help make such outrageous outcomes less common.

[I have expanded the opening quotation to clarify that Obama was talking specifically about mandatory minimums for nonviolent drug offenses.]