Libertarians should stay out of the next round of the culture wars. 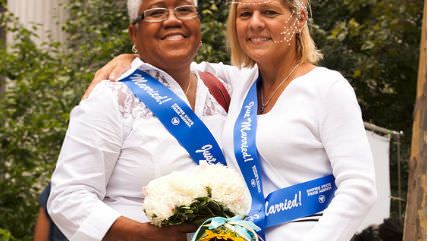 By advocating for limited government that stays out of the bedroom, we libertarians have played a crucial role in the American victory for same-sex marriage. And in the next round of culture wars that the Supreme Court's landmark ruling is already spawning, it seems both sides—religious conservatives and gay-right advocates—are turning to

libertarian-oriented remedies to advance their agenda.

But that last part is actually is not good news for libertarians. Why? Because both sides are using libertarian ideas as a cudgel, not an olive branch.

Libertarianism has been at the forefront of the gay rights cause from the get-go. Reason has always maintained that the government has no business regulating—much less criminalizing—what two people do behind closed doors so long as they don't hurt anyone. It is no exaggeration to suggest that this simple moral intuition to live and let live eventually produced the rapid-fire revolution in public opinion that culminated in the Supreme Court ruling (even though its legal reasoning is a holy mess).

As Cato Institute's David Boaz points out, libertarians were making arguments in support of gay marriage way before the cause became hip among progressives. The Libertarian Party demanded equality for gays back in 1972, when the Democratic vice presidential nominee was still referring to gays as "queers," and endorsed gay marriage in 1976. Indeed, John Podesta, founder of the premier progressive think tank Center for Progress and a perennial advisor to Democratic presidents, noted in 2011 that one would have probably had to be a libertarian to support gay marriage 15 years earlier, notes Boaz.

But now, in the wake of the gay marriage revolution, conservatives and progressives alike are turning to libertarian ideas—and both for the wrong reasons.

Let's begin with the left. As if on cue, no sooner did the ruling come out than progressives such as Felix Salmon started calling for scrapping the tax-exempt status of religious non-profits that preach against gay marriage, just as conservatives had feared would happen. "It would be unconstitutional to single out religious institutions to make them pay more tax than anybody else, but the government has every right to stop giving them tax-free privileges," Salmon harrumphed. But since denying some faith-based organizations a tax exemption because of their faith would be a violation of their First Amendment rights—something that Justice Kennedy said he wouldn't stand for in his majority opinion—Salmon hinted he would be fine with the "libertarian" solution to "abolish tax exemption for all religious organizations."

Salmon predictably trotted out the analogy with Bob Jones University losing its tax-exempt status when it continued to preach against interracial marriage after the passage of the Civil Rights Act to justify yanking the tax exemptions of anti-gay churches. But here's the thing: Odious though this execrable organization's views are, from a pure libertarian standpoint, it probably shouldn't have been singled out—so long as it was only preaching against interracial marriages, not taking coercive action to prevent them. The reason that it was politically possible to slap down Bob Jones was that the university was part of a dominant white establishment that had long oppressed blacks. Singling it out was a way for whites to purge their own inner demons.

However, today's opposition to gay marriage, awful though it is, emanates not only from finger-wagging, Bible-thumping whites, but also many minorities. Homophobia is arguably more prevalent among blacks and Latinos than religious whites. Yet their churches perform vital services for minority children, offering a semblance of stability in a sea of poverty and family breakdown. Taking away their tax exemption—either by targeting them specifically or as part of an overall rollback—would consign these children to even more misery. And politically, it would be nearly impossible. This would make gays-rights activists look like fanatical Jacobins willing to sacrifice living, breathing humans to satisfy a thin-skinned need to purge every last vestige of anti-gay animus.

But progressives are not the only ones misusing libertarian ideas when it comes to gay marriage. Conservatives are, too.

New York Times columnist David Brooks has warned religious conservatives that they will continue fighting the sexual revolution at the risk of alienating future generations of Americans. Far better, he advises, would be to define a rich faith like Christianity not solely by its opposition to harmless sexual behavior, but by doubling down on its "good works" traditions to win back lost hearts and minds.

However, instead of doing that, religious conservatives are already looking for ways to flout the Supreme Court ruling. Since Justice Kennedy ruled that states can't selectively withhold marriage licenses from gay couples without running afoul of the 14th Amendment's equal treatment injunction, Sen. Rand Paul, the libertarian-leaning Republican presidential aspirant from Kentucky, is calling on them to simply get out of the marriage business. What's more, Texas and Mississippi are heeding his call and have announced they might stop issuing marriage licenses altogether.

Privatizing marriage is a long-standing libertarian idea whose whole purpose was to foster John Stuart Mill's "thousand experiments in living." Pulling it out now to deny gays an opportunity to get married—in a sense, keeping alive discrimination by privatizing it—will not just pervert the idea but also discredit it, just as the bedrock libertarian principle of voluntary association became suspect when it was invoked by racists during the Civil Rights struggle to legitimize private discrimination against blacks.

The fate of ideas depends very much on the causes to which they get hitched. The gay marriage ruling is a victory for libertarians. But this victory will be short lived if we don't negotiate the new round of culture wars carefully to prevent our ideas from being deployed for nefarious causes by both the left and right.