And what could make them love him more 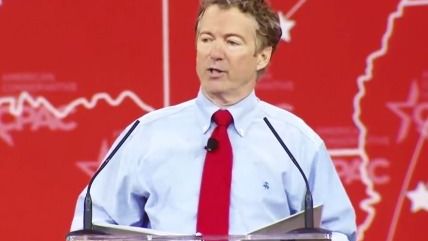 Last week Rand Paul got a higher grade on marijuana policy than any other presidential candidate in a report card from a leading reform group, and this week he held a fundraiser at a cannabusiness convention in Denver. In my latest Forbes column, I review the positions that have made the Kentucky senator popular among pot entrepreneurs:

This week about 40 people paid at least $2,700 each to hear Rand Paul talk about drug policy during the National Cannabis Industry Association's conference at the Denver Convention Center. That "private briefing" made the Kentucky senator the first major-party presidential candidate to hold a fundraiser aimed at people in the marijuana business.

"We are now establishing ourselves as a true industry with a professional focus, and we have issues that we need to have dealt with on the federal level," Taylor West, deputy director of the National Cannabis Industry Association, told The Washington Post. "We have candidates and elected officials who are seeing that need for reform." Tripp Keber, CEO of Dixie Elixirs & Edibles, a Denver-based manufacturer of marijuana products, called the fundraiser "a historical moment, that our industry is now working together with a presidential candidate."

That the candidate was a Republican may seem counterintuitive, but that it was Paul is hardly surprising. For years the self-described "libertarian-ish" conservative has been criticizing the war on drugs and recommending a state-centered approach to psychoactive substances. Among other things, that means states like Colorado are free to adopt policies that allow businesses like Keber's to flourish. Although Paul has refrained from endorsing marijuana legalization, he opposes federal interference with the industry, which is the biggest obstacle it currently faces.