If you think self government means each person is free to govern himself or herself and that the protection of rights and equality under the law serve that end-Scalia says you're wrong. 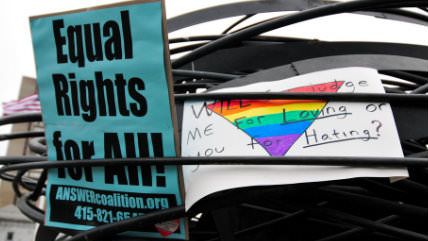 Conservatives warn that the so-called liberals on the Supreme Court endanger our liberties. This is certainly true, although not exactly as the conservatives mean it. Now it's time for them to acknowledge that the court's conservatives do the same.

Case in point: Justice Antonin Scalia's dissent in Obergefell v. Hodges (PDF), the case that declared state laws forbidding legal recognition of same-sex marriages unconstitutional. Scalia's opinion is worth examining apart from the particulars of Obergefell. As he points out—let's take him at his word—what he objects to in Justice Anthony Kennedy's majority opinion has nothing to do with same-sex marriage per se. What concerns him is not the content of the opinion but the activity the majority engaged in to arrive at it.

As he writes at the very top: "It is not of special importance to me what the law says about marriage. It is of overwhelming importance, however, who it is that rules me. Today's decree says that my Ruler, and the Ruler of 320 million Americans coast-to-coast, is a majority of the nine lawyers on the Supreme Court." Specifically, he laments "the Court's claimed power to create 'liberties' that the Constitution and its Amendments neglect to mention."

This is a powerful clue to Scalia's philosophy, which conservatives either embrace or ignore. In Scalia's view we have only the liberties mentioned in the Constitution and its amendments, and those are the only liberties the Supreme Court should concern itself with. This view would be worrisome even if among those amendments we did not find number nine, which states,

The enumeration in the Constitution, of certain rights, shall not be construed to deny or disparage others retained by the people.

To quote Rick Perry, "Oops." I guess he forgot.

When the court "creates" rights not expressly mentioned, Scalia says, it "robs the People of the most important liberty they asserted in the Declaration of Independence and won in the Revolution of 1776: the freedom to govern themselves."

If you think that self-government means that each person is free to govern himself or herself and that the protection of rights and equality under the law serve that end—Scalia says you're wrong.

He is sad that court's ruling ended the same-sex marriage debate—a "display[ of] American democracy at its best."

Americans considered the arguments and put the question to a vote. The electorates of 11 States, either directly or through their representatives, chose to expand the traditional definition of marriage. Many more decided not to. Win or lose, advocates for both sides continued pressing their cases, secure in the knowledge that an electoral loss can be negated by a later electoral win. That is exactly how our system of government is supposed to work.

To be sure, he says, the Constitution and its amendments limit such "self-rule":

Forbidden are laws "impairing the Obligation of Contracts," denying "Full Faith and Credit" to the "public Acts" of other States, prohibiting the free exercise of religion, abridging the freedom of speech, infringing the right to keep and bear arms, authorizing unreasonable searches and seizures, and so forth.

That pesky Ninth Amendment is left out again.

"Aside from these limitations," he continues, "those powers 'reserved to the States respectively, or to the people' can be exercised as the States or the People desire." (My emphasis.)

The aim of the ancients was the sharing of social power among the citizens of the same fatherland: this is what they called liberty. The aim of the moderns is the enjoyment of security in private pleasures; and they call liberty the guarantees accorded by institutions to these pleasures.

Scalia has the mind of an ancient. It's odd that Scalia regards himself as a defender of the founders' vision when the founders (despite their faults) regarded themselves as men of the Enlightenment. One need not embrace Kennedy's opinion in all its particulars to see that Scalia's ancient philosophy is as much a danger to liberty as anything the so-called liberals might come up with.