Bill Clinton offered a tradeoff, while Hillary Clinton may be offering a handout. 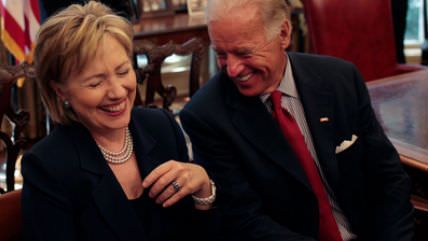 Hillary Clinton's big campaign rally over the weekend offered a hint of how she's going to handle a trillion-dollar question—what to do about demands by Senator Elizabeth Warren and the remnants of the "Occupy" movement for forgiveness of student loan debt.

"I believe that success isn't measured by how much the wealthiest Americans have, but by…how many young people go to college without drowning in debt," Clinton said.

In case anyone missed the point, she returned to it later in her speech. "Let's make college affordable and available to all …and lift the crushing burden of student debt," she said.

Clinton will release detailed plans about student loans "in mid-July," Politico's Annie Karni reported, making it one of the earliest policy rollouts of her campaign.

If a Clinton presidential campaign focused on college affordability sounds familiar, it should, at least if you are older than 40. Clinton's remarks over the weekend sent me looking back through online archives to find an article I wrote in January 1993 about the popularity of then-president-elect Bill Clinton's campaign promise of a "domestic G.I. Bill." The 1992 Democratic Party platform promised to "enable all Americans to borrow money for college, so long as they are willing to pay it back as a percentage of their income over time or through national service addressing unmet community needs."

So it will be illuminating to watch for the details of Clinton's student loan program. Back in 1992, Bill Clinton was for income-based student loan repayment, or for loan forgiveness in exchange for national service. If Hillary Clinton comes out in favor of a more generous plan—say, loan forgiveness or modification based on no repayment or without any national service—it says something about how the Democratic Party has moved to the left over the past 23 years, or about the ideological differences between the more centrist Bill Clinton and his more left-of-center spouse. In Kennedy-esque terms, Bill Clinton was asking what you can do for your country, while Hillary Clinton may be offering what your country can do for you. Bill Clinton was offering a tradeoff, while Hillary Clinton may be offering a handout.

For an advance look at what Hillary Clinton may have in mind, check out Senator Elizabeth Warren's recent speech to the American Federation of Teachers. Professor Warren, a Democrat of Massachusetts, nods in the direction of bipartisanship, acknowledging Republican concerns about federal dollars subsidizing campus amenities like "fancy dorms, high-end student centers, climbing walls and lazy rivers," along with "exploding numbers of administrators."

Said Warren, "Conservatives are right: we can't keep pouring money into schools without demanding something in return." She mentioned an idea backed by Senator Alexander, Republican of Tennessee, and "conservatives at the American Enterprise Institute," to leave colleges, rather than taxpayers, on the hook when a student defaults on a loan.

Get past the bipartisan window-dressing, though, and the key provision is this, in Warren's words: "students who are crushed by student loan debt need better protection. When they've fallen off a financial cliff, they should be able to discharge debts in bankruptcy. When their schools break the law and defraud them, students should also be released from their student loans."

None of this is to say that college affordability isn't an issue. But where's the justice in telling parents who sacrifice to save for college, or students who finance their studies with ROTC scholarships, that families who make less prudent choices will get a free ride? And what will federal loan forgiveness do to the incentives of entrepreneurs who are trying to use technology to reduce the cost of higher education?

Hillary Clinton is counting on nostalgia for Bill Clinton's presidency to help boost her own candidacy. But the student loan issue is an early warning that the inevitable comparisons between her and him may not always be flattering to her. (Free trade, where Bill Clinton had a fine legacy but Hillary Clinton has waffled, is another.) Before Clinton gets into any debates with Republicans, she'll have to reckon with the formidable policy record of her own husband.