A left-wing pundit attacks the Vermont socialist for being insufficiently anti-gun. 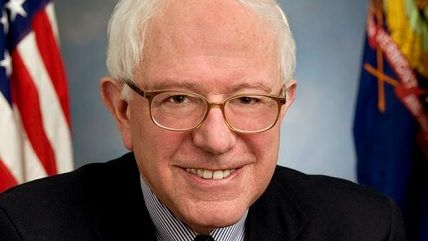 Last month Sen. Bernie Sanders (I-Vt.) announced his candidacy for the Democratic presidential nomination. A self-described socialist and outspoken foe of deodorant choice, the greying radical made it clear that he sees himself as the one true progressive running for the White House.

But is he? Not according to left-wing pundit Mark Joseph Stern. Writing at Slate last month, Stern warned his liberal readers to beware Sanders' siren song. "Before liberal Democrats flock to Sanders," Stern wrote, "they should remember that the Vermont senator stands firmly to Clinton's right on one issue of overwhelming importance to the Democratic base: gun control." How bad is it? This bad, according to Stern:

[Sanders'] voting record paints the picture of a legislator who is both skeptical of gun control and invested in the interests of gun owners—and manufacturers. In 1993, then-Rep. Sanders voted against the Brady Act, which mandated federal background checks for gun purchasers and restricted felons' access to firearms. As a senator, Sanders supported bills to allow firearms in checked bags on Amtrak trains and block funding to any foreign aid organization that registered or taxed Americans' guns. Sanders is dubious that gun control could help prevent gun violence, telling one interviewer after Sandy Hook that "if you passed the strongest gun control legislation tomorrow, I don't think it will have a profound effect on the tragedies we have seen." (He has since endorsed some modest gun control measures.)

In reality, as Stern parenthetically conceded at the end of that overwrought paragraph, Sanders supports plenty of gun control measures, including intrusive background checks and sweeping federal bans on "assault weapons." Sanders' one and only sin—or should I say virtue?—is that he's slightly out-of-step with the anti-gun zealotry embraced by Stern. Will that mild apostasy on gun control hurt Sanders' already-slim chances in the Democratic primary? I doubt it, but I guess we'll find out.