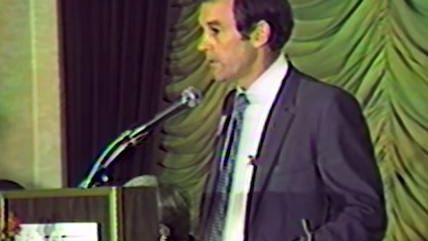 In 1983, when Reason celebrated its 15th birthday, one of the speakers at the anniversary dinner was a Texas politician by the name of Ron Paul. (He was younger then than Rand Paul is now.) Lines from the speech include "some of my best friends are anarchists," "fortunately, though, more and more people are joining the underground economy," and other sentiments not ordinarily expressed by a sitting congressman:

The recording comes via libertarianism.org, which has been gradually posting Jim Turney's vast collection of footage of libertarian lectures and panels. (My favorite is the video of Karl Hess and Robert Anton Wilson getting high together at the 1987 Libertarian Party convention.) Check out the rest of the Turney tapes here. For past editions of the Friday A/V Club, go here.