The fuzziness of Baltimore's switchblade ban helps the cops who say they were enforcing it. 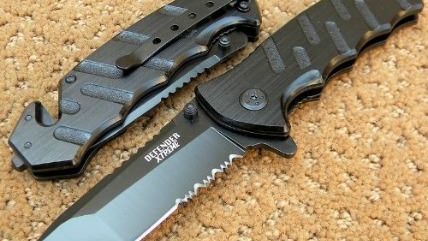 Of the criminal charges proposed by Marilyn Mosby, the state's attorney for Baltimore, in connection with the death of Freddie Gray, three are notably missing from the indictments approved by a grand jury today. The Washington Post reports that "charges of false imprisonment against three of the officers are no longer part of the case." That change presumably reflects the dispute over whether the knife Gray was carrying, which was the official justification for his arrest, qualified as an illegal switchblade.

Judging from the way police described Gray's knife ("a spring-assisted, one-hand-operated knife"), it did not fit the state's definition of a switchblade (as Mosby noted) and probably did not fit the city's definition either. But the latter point—which Mosby did not publicly address, even though Gray was charged with violating the city ordinance—is open to debate, which suggests that the officers who arrested him might reasonably have believed the knife was illegal. If so, they could not be convicted of false imprisonment, since to arrest Gray they needed only probable cause to believe he had broken the law.

As I have said before, the fuzziness that helps the officers' defense highlights the arbitrariness and unfairness of this ordinance. They may have honestly believed they were enforcing this law, but that does not make the law any less stupid or unjust. If a law is so vague that police and prosecutors disagree about what it means, it is absurd to expect that the average person will know when he is violating it. In any case, a man's freedom, let alone his life, should not hinge on the presence or absence of a spring in his pocket knife.