As foreshadowed in his Reason TV interview, Purdue president gets free-speech 'green light' from FIRE 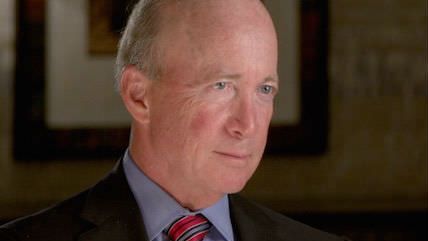 In my interview with former Indiana governor and current Purdue University President Mitch Daniels, we had the following exchange on the always-contentious topic of campus free speech:

REASON: For those of us who don't spend a lot of time on college campuses and get our information through oftentimes partisan media, it can seem like it's just a hellbroth of micro-triggering and people in free-speech cages over in a corner. What's your assessment of the climate of free speech on campus nationwide, and at Purdue? Is it as bad as some of us suspect?

Mitch Daniels: In places it obviously is. We all read about them and you just shake your head. I can tell you that Purdue's different, and I think you don't hear about the places where free speech is respected and protected; naturally enough you don't. We feel very strongly about it; about to take some future actions to ensure that what's been a good record remains that way. And we've indentified some small policies that were less than ideal and we're changing those. But no, I think that the spirit of free inquiry is still strong on our campus, and I hope on most. But clearly there are places where it's violated in truly unfortunate ways.

The interview was conducted on May 5. Ten days later, Daniels put his money where his mouth was. Here's a press release from that day issued by the Foundation for Individual Rights in Education (FIRE), the terrific campus free-speech group:

WEST LAFAYETTE, Ind., May 15, 2015—The Foundation for Individual Rights in Education (FIRE) is pleased to announce that Purdue University has earned FIRE's highest, "green light" rating for free speech. With help from FIRE, Purdue revised its speech-related policies to comply with the First Amendment. Purdue further affirmed its commitment to academic freedom and freedom of expression by adopting a statement similar to the University of Chicago's laudable statement on academic freedom, endorsed by FIRE in January. […]

Purdue becomes the 21st green light institution in FIRE's Spotlight database of over 400 colleges and universities, as well as the second university in a month to earn a green light rating.

It's worth noting here that Mitch Daniels is a longtime Republican. Was a time when many people assumed that free speech, especially the risqué stuff you'd hear on college campuses, was a particularly left-of-center value. But as Nick Gillespie and I observed in The Declaration of Independents: How Libertarian Politics Can Fix What's Wrong with America, "It is a shock to tender ears, we realize, but by any meaningful yardstick, Democrats do not care about free speech, and Republicans do not care about free enterprise."

With some polls showing majority Democratic support for criminalizing "hate speech"; with the party looking set to nominate a presidential candidate who is historically awful on free speech, and with more actions like those taken by Daniels, the old assumptions may be reversing themselves.

I wrote about "When the Left Turned Against Free Speech" last year, and after the jump you can find a talk I gave on the subject in Santa Barbara earlier this year.

And here's that Mitch Daniels interview: