Rand Paul: "Was it a good idea to invade Libya? Did that make us less safe?" 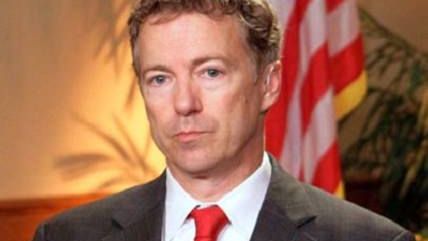 Libertarian-leaning Republican Sen. Rand Paul of Kentucky was on Meet the Press yesterday, where he talked about foreign policy blunders and how not to repeat them. Here's an exchange that underscores that Paul is thinking differently about foreign policy than most of the other folks (Republican or Democratic) running for president:

Chuck Todd: …are you satisfied after Governor Bush's sort of fourth answer on this, saying that he wouldn't have gone into the war in Iraq, knowing what we know now? Are you satisfied now that Governor Bush won't be taking us back to the Bush foreign policy? You had said that that was an important litmus test for him.

Rand Paul: …I think when Hussein was toppled, we got chaos. We still have chaos in– in Iraq. I think it emboldened Iran. I think—we now have the rise of radical Islam in Iraq as well. But I think the same question, to be fair, ought to be asked of Hillary Clinton, if she ever takes questions.

They should ask her, "Was it a good idea to invade Libya? Did that make us less safe? Did it make it more chaotic? Did it allow radical Islam and I.S.I.S. to grow stronger?" So I think the war in Iraq is a good question and still a current question, but so is the question of, "Should we have gone into Libya?"

Paul has a new book coming out, in which he outlines various policies, including those related to foreign affairs and military intervention abroad. Todd quotes a passage about our Libya policy thus:

"The problem is, we've already sent the wrong message. The last time a leader gave up his desire for weapons of mass destruction, we bombed his country and took him out."

When asked by Todd about foreign policy and defense spending, Paul replied:

I think that we always have to have the threat of military force behind diplomacy. But I would prefer diplomacy. I think we can still have negotiations. And the thing is—is that we negotiated with the Soviets for 70 years and we ended up coming to a peaceful outcome. I think, with Iran, we need to be steady and firm that they cannot have a nuclear weapons program. There has to be the threat of military force. But my hope is really that negotiations continue. There are some in my party who say, "Oh, I don't want any negotiations." They're ready to be done with it….once you're done with negotiations, the choices are war, or they get a weapon, and I don't wanna have just those two binary choices.

Read the full transcript, in which Paul reiterates a firm stance against Patriot Act reauthorization, here.

I'm glad to see Paul becoming more outspoken about the limits of intervention as a go-to strategy. His recent gestures toward increasing defense spending and sounding a more bellicose line on military action are troubling not just because they ape a generally ineffective Republican Party line but because, as he points above, they haven't worked.