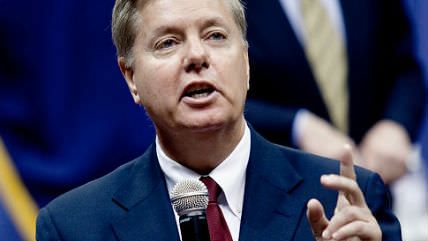 Another day, another round of embarrassing authoritarian nonsense from would-be Republican presidential candidates. Sen. Lindsey Graham (R-S.C.), the honey-throated apocalyptic who Ed Krayewski writes about below, made the following "joke" on Saturday:

Previously in Graham joke-ology, John McCain's mini-me said that the "first thing" he would do as president is refuse to "let Congress leave town until we fix this. I would literally use the military to keep them in if I had to. We're not leaving town until we restore these defense cuts." Tee-hee!

Speaking of longshot candidates, New Jersey Gov. Chris Christie apparently thinks this is a winning message in the Live Free or Die State:

Christie will say [in prepared remarks Monday] that Americans "shouldn't listen to people like Edward Snowden, a criminal who hurt our country and now enjoys the hospitality of President Putin – while sending us messages about the dangers of authoritarian government."

"When Edward Snowden revealed our intelligence secrets to the world in 2013, civil liberties extremists seized that moment to advance their own narrow agenda. They want you to think that there's a government spook listening in every time you pick up the phone or Skype with your grandkids," Christie is set to declare.

While savoring that phrase civil liberties extremists, please do note that John Ashcroft was going around giving that same speech back in the summer of 2003, just lying his face off in the process.

The most cheery aspect to this sub-Zell Miller crankery is that neither Graham nor Christie has a prayer in the 2016 race, quite unlike the man in both of their crosshairs: Sen. Rand Paul (R-Ky.). The bad news is that both of these powerful politicians are spectacularly wrong, yet their views are widely shared at the top of the GOP.

One of the most important meta-fact about the Obama-era Republican Party is that even during a time of largely crappy economic performance, and largely ascendant electoral gains, the party itself has lost market share. If party leaders think the key to ever-elusive Millennial hearts is being more willing to kill people and inaccurately dissing Edward Snowden (a man whose revelations were considered plenty worth listening to by the 2nd Circuit Court of Appeals), then they will keep getting the presidential electoral results that they deserve.