The Economics of The Rolling Stones, LeBron James, and Downton Abbey 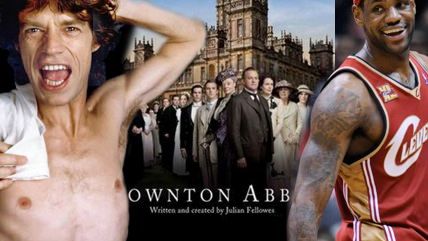 "In [1970s'] Great Britain, the top tax rate was 83 percent on income. If you made made an investment and you had any returns, it was going to be at 98 percent," says John Tamny of RealClearMarketsand Forbes. "As Keith Richards points out in his autobiography, that was the equivalent of being told to leave the country. Well guess what? The Rolling Stones left the country."

In his new book, Popular Economics, Tamny explains how perverse economic policies pushed Richards, Mick Jagger and the rest of The Rolling Stones into tax exile. While millionaire rock stars will do well wherever they go, Tamny stresses that the middle-class sound engineers and studio hands who worked with the Stones and other bands were left behind and thus were the real victims of the soak-the-rich tax policy.

Popular Economics uses everyday examples from pop culture to explain economic principles and argue for policies that will create more growth, opportunity, and innovation. When basketball great LeBron James departed Cleveland for Miami, says Tamny, he illustrated important lessons about free trade. James' decision to play for the NBA's Heat—an organization determined to win an NBA championship—demonstrates the upside of open borders and labor mobility. When people are free to travel, workers end up where their talent is most valued.

The popular TV show Downton Abbey, says Tamny, dramatizes how many resources are spent fending off stupid and invasive government regulation and controls on businesses. All that time, money, and energy spent complying with top-down edicts is time, money, and energy not spent increasing your business or creating the next great breakthrough product.

Nick Gillespie talks with Tamny about Popular Economics and what it will take to create an America that is always getting richer and freer.

Produced by Todd Krainin. Cameras by Meredith Bragg and Krainin.