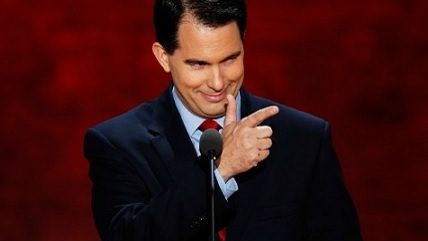 Republican presidential hopeful Gov. Scott Walker of Wisconsin has already flip-flopped when it comes to immigration.

Once upon a time, he supported the Reaganite position which holds that immigration is a good thing and illegals should be given work permits at least. In 2006, Walker supported the McCain-Kennedy bill that would have granted a path to citizenship (nativists vilify that as amnesty) for illegals. But that was then, reported Politico, and the governor now supports curbs on legal immigration.

Walker has a new apparent flip flop in the works, this one about the auto bailouts. Back in 2012, he was unambiguous in arguing that the government bailouts of GM and Chrysler retarded economic recovery in the industrial Midwest and the country as a whole:

When Republicans nominated as their presidential candidate Mitt Romney, he of the now-infamous "Let Detroit Go Bankrupt" column, Walker railed against the bailouts in an interview with MSNBC's Rachel Maddow. Like Romney, Walker argued that the federal government's approach cost too much taxpayer money and, when pressed by Maddow, concluded that the program was not helpful in Wisconsin.

"I'm just pointing out it didn't [work] in Wisconsin and ultimately did in places like Michigan and elsewhere," Walker told Maddow, "but it could have come back more effectively and sooner had they taken the advice of Mitt Romney early on and done a managed bankruptcy instead of spending all those dollars of taxpayers' money that otherwise could have been done more effectively in the private sector early on."

What a difference a few years and greater ambitions make. Speaking at an Oldsmobile museum in Cleveland, Walker now moves his lips like this when asked about the efficacy of the bailouts:

"That's a hypothetical question from the past," the Wisconsin governor and likely Republican presidential candidate replied, according to accounts from multiplelocal reporters. "I think what we're going to talk about is the future."…

Walker's political team declined to clarify his current position on the bailouts when asked this week by the Northeast Ohio Media Group. So it's hard to say whether Walker has abandoned his past views or if he's only trying to avoid spelling it out for voters who might be disinclined to support him if they know precisely where he stands.

Just what we need, right? A Republican candidate who explicitly devolves from openness to nativism on immigration while zipping up over an apparent flip-flop regarding an illegal bailout of car companies by the government. If the best you can say is that he's "only trying to avoid spelling" out positions to voters who would then "be disinclined to support him if they know precisely where he stands," well, your're not really saying anything nice at all, are you?