After supporting legalization for undocumented aliens, he now opposes even legal immigration 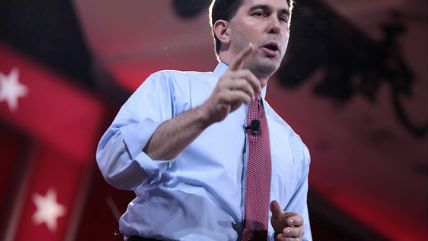 Hillary Clinton yesterday came out forcefully in favor of a path to citizenship for undocumented aliens. Setting aside

the irony of the party of labor unions positioning itself as a champion of labor mobility and (at least indirectly) against labor protectionism, this is a very smart move because it plays to her party's Hispanic base while (further) discrediting Republicans with it. Not that Republicans need any help on that front.

They are fearlessly sliding down the political deadend of the restrictionist road. And the latest to tread on it is Wisconsin Governor Scott Walker, a union-busting right-wing darling who is fast becoming the GOP front-runner for the presidential nomination. Once the most enlightened voice in his party on the issue, he shocked everyone recently by questioning not just illegal but legal immigration. This was in sharp contrast to his previous positions when he  supported a path to legalization for undocumented aliens in the country and supported throwing open the door to others as statements like this suggested:

"If people want to come here and work hard and benefit, I don't care whether they come from Mexico or Ireland or Germany or Canada or South Africa or anywhere else. I want them here."

Yet now he is insinuating, a la ultra-restrictionist Sen. Jeff Sessions, that even legal immigration needs to be reconsidered becasue it threatens American wages and jobs.

But Walker's immigration switcheroo is not the real story. The real story is the  switcheroo by the right-wing punditry without which his would not have happened, I note in a column this morning in the USA Today:

But if Walker thinks he can get away with embracing labor protectionism it's because he knows that respectable conservatives will give him cover, something he could not have counted on before. That's because, until recently, except for National Review, the vast bulk of smart-set conservative opinion was decisively in favor letting market need — not the arbitrary whim of a labor bureaucracy beholden to unions — set immigration levels.