The Republican presidential candidate notes the need to "undo some of the harm inflicted by the Clinton administration." 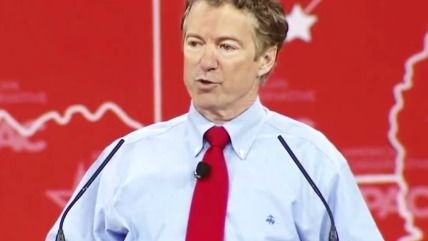 Earlier today I noted that Hillary Clinton, while declaring "it's time to end the era of mass incarceration," did not mention her own role in promoting the "tough on crime" policies that have put so many people in prison for so long. This morning Rand Paul's office issued a press release calling attention to that omission:

According to Salon, the Clinton administration's focus on the "War on Drugs" is responsible for increasing incarceration by 673,000 new inmates….

Not only is Hillary Clinton trying to undo some of the harm inflicted by the Clinton administration, she is now emulating proposals introduced by Senator Rand Paul over the last several years, and we welcome her to the fight.

The explosion of the prison system under Bill Clinton's version of the "War on Drugs" is impossible to dispute. The total prison population rose by 673,000 people under Clinton's tenure —or by 235,000 more than it did under President Ronald Reagan, according to a study by the Justice Policy Institute. "Under President Bill Clinton, the number of prisoners under federal jurisdiction doubled, and grew more than it did under the previous 12-years of Republican rule,combined," states the JPI report. The federal incarceration rate in 1999, the last year of the Democrat's term, was 42 per 100,000—more than double the federal incarceration rate at the end of President Reagan's term (17 per 100,000), and 61 percent higher than at the end of President George Bush's term (25 per 100,000), according to JPI.

The JPI report, titled "Too Little, Too Late: President Clinton's Prison Legacy," is here. Hillary Clinton is not her husband, of course, but she was a vocal supporter of his criminal justice policies, and her recent discussions of reform have been notably light not only on references to his administration but on references to the drug war's role in overincarceration.

By welcoming the presumptive Democratic presidential nominee to the fight for criminal justice reform, of course, Paul, who is seeking the Republican nomination, is not-so-subtly calling attention to her lack of interest in the issue for most of her career and drawing a contrast with his own persistent and varied efforts in this area. In case you did not get the point, the press release closes by describing five criminal justice bills Paul has introduced this session, addressing mandatory minimum sentences, asset forfeiture, restoration of voting rights, expungement of criminal records, and police body cameras. Despite the tweak, if Clinton means what she says about putting aside partisan differences to "restore balance to our justice system," she should be happy to "work together" with political adversaries such as Paul "to get the job done."