Arresting someone in America should never look like this. 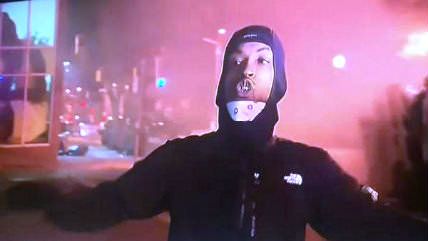 A lot of disturbing video has come out of Baltimore in the past few days, but this state-sanctioned abduction caught live on CNN is in a league of its own. The video starts with young activist Joseph Kent, a student at Baltimore college Morgan State, as he protests in front of a line of armed National Guard on Tuesday night. Then the camera pans to a black Humvee, slowly cruising onto the scene.

The CNN commentators continue to yammer on about police "optics" as the Humvee inches closer to Kent. Suddenly, several National Guardsmen break from the line and shove Kent into the still-moving vehicle. "What it appears to me that Baltimore is trying to do is do something a little different here," one anchor chirps, oblivious, as the Humvee continues on with Kent now in tow.

Though the CNN commentators appear entirely unfazed by these events—in all fairness, they probably had no idea what footage was being shown on screen as they spoke— people on social media soon began asking questions about what the hell that was they just saw.

Remember in Ghost when the shadows come alive to grab you and take you to hell? That's what that looked like. #JosephKent #BaltimoreUprising — Dee Phunk (@DeePhunk) April 29, 2015

It turns out Kent was picked up for being out protesting after the city's emergency 10 p.m. curfew. USA TODAY attempted to contact the Baltimore Police Department about Kent, but no luck.

Baltimore lawyer Steve Beatty tweeted this morning that Kent is currently being held at Baltimore Central Booking and Intake Center. Beatty said Kent has since retained him as his lawyer and they will be holding a press conference Wednesday afternoon at 4 p.m.

Even if #JosephKent was out after curfew, they didn't *arrest* him. No Miranda. They literally disappeared him. https://t.co/kKW2AIZiSp — Imani Gandy (@AngryBlackLady) April 29, 2015

An arrest should NEVER look like this in a democracy. This is like blackbag kidnapping. #JosephKent #Baltimore pic.twitter.com/02aGdM98Z9 — Darrell Bouldin (@DarrellBouldin) April 29, 2015