End the Violence in Baltimore: Rioting and Looting Never Justified 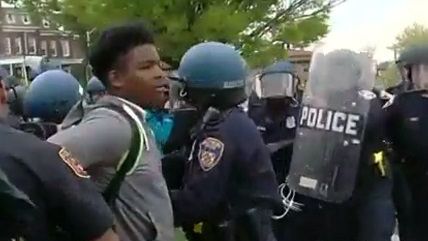 Violence has engulfed Baltimore, Maryland, in the wake of the funeral for Freddie Gray, a black 25-year-old who died while in police custody last week. It's a confusing scene, but CNN is reporting that high school students started throwing rocks at police. Later, a CVS was looted by protesters, and someone lobbed a Molotov cocktail at a police car. It erupted in flames.

Several police officers have already been injured in the attacks, and arrests are being made.

This kind of violence is always wrong, even when it arises out of legitimate concerns about police brutality. That the criminal justice system is barbaric and in desperate need of reform is not an excuse to set cars on fire, or rob convenience stores, or throw rocks at anyone: cop, civilian, or bystander. Violence is violence, and it's wrong. That's a foundational principle of libertarianism, for one thing.

For another, looting and rioting do not inspire support for police reform. Rather, such violence provides law enforcement and its supporters the exact justification they need to escalate their efforts.

As Rev. Jamal Bryant said on CNN earlier today, "Breaking glass and windows is not reflective of justice."

(Someone tell Matt Bruenig that.)