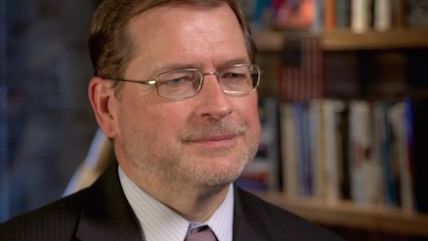 "I think it speaks to the health of American society that people don't buy into envy and class antagonisms the way that the Left thinks they do," says Grover Norquist, president of Americans for Tax Reform and author of End the IRS Before It Ends Us: How to Restore a Low Tax, High Growth, Wealthy America.

Ending the income tax is part of Norquist's wide-ranging push to reign in spending and reform government entitlements. As he explains to Reason's Nick Gillespie, the revolution is beginning in the most unlikeliest of states: Kansas.

"Kansas is the future. Kansas is the model," Norquist says. "It became a Reagan-Republican House, Senate and governorship only with Governor Brownback's governorship. He…passed a law that fazes out the income tax over time. As revenue comes in from economic growth–more than 2%–you ratchet down the income tax."

For Norquist stopping ever-growing government and taxation is the only way to bring economic competitiveness back, but it's average Americans that will make that change. "For those of us who think small government and low taxes is a better idea, guess what? Most people are with us. People are moving from high-tax states to low-tax states."