Why Do Police Kill People? Because We Tell Them To 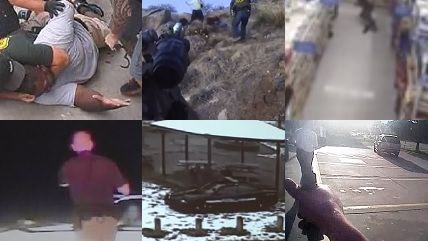 There's no doubt that in the last eight months the issue of police violence has broken a barrier in the news cycle it had never broken before. Cases like the police killings of Ramarley Graham and Kelly Thomas may have been local stories that gained national attention and even protests, but the attention never lasted. The killing of Michael Brown, which the Department of Justice ruled justified, sustained national protests that led to subsequent protests over other police killings, like Eric Garner in New York City (which happened before Brown's but didn't get sustained attention until after), the recent killing of Walter Scott by Michael Slager in South Carolina, and Eric Harris by Robert Bates in Oklahoma.

While data on police killings is incomplete because it largely relies on self-reporting, the data that does exist suggest police killings are going up even as violent crimes and the killing of police officers is going down. More than 1,000 people were killed by police in 2014. The newfound sustained attention to the issue has produced a lot of commentary on the contours of the problems and on possible solutions. But while politicians as different as Sens. Elizabeth Warren (D-Mass.) and Rand Paul (R-Ky.) have commented on police violence issues, these haven't become "election issues" just yet. It's important that they do.

Police violence issues don't just encompass the police reforms that could limit the more egregious incidents of abuse—things like deploying body cameras or limiting union influence on police discipline—but the issues that create the space for the violence in the first place. Police first engaged Eric Garner, for example, after being explicitly ordered to crack down on the sale of loose, untaxed cigarettes. Afterward, New York City's mayor, Bill de Blasio, resisted attempts to connect strict enforcement of petty laws, which are disproportionately applied to poor, largely minority, communities, to the spate of police violence in the city last summer. He insisted police would continue to "strictly enforce" the petty laws because "the law is the law." Commitment to the law didn't stop de Blasio from operating New York as a sanctuary city because of the perceived injustice of immigration laws but did stop him from pulling police back from the kinds of interactions that inherently introduce violence—police authority backed by the use of force—to non-violent situations—things like selling loose cigarettes or possessing drugs.

It got worse. When police in New York City said they wouldn't make arrests unless "absolutely necessary" after two cops were shot by a deranged out-of-towner and arrests dropped 66 percent on the strength of 90+ percent drops in minor offense summonses, traffic, and parking citations, the liberal establishment in New York City went into an uproar. Yet the elimination of unnecessary arrests ought to be considered an unqualified success for the anti-police violence movement. Unnecessary arrests, like unnecessary interactions over minor, non-violent offenses, introduce violence to a situation by pitting police officers authorized, and often commanded, to use force to maintain compliance of laws against non-violent offenses reasonable people who believe they are free may not always want to comply with. When New York City police pulled back from unnecessary interactions with and arrests of city residents, especially in poor, largely minority communities, The New York Times argued such "disobedience" by police amounted to a "civil rights violation." Rather than remaining mostly silent, had individual officers framed their avoidance of unnecessary arrests as a conscientious objection, would that have allayed fears of a security service refusing to obey the orders of its government, even when those orders lead to unnecessary arrests?

In that press conference last summer where de Blasio insisted petty laws would keep being strictly enforced, NYPD commissioner Bill Bratton explained that correcting your behavior when approached by a police officer was what "democracy" was all about. He was partially right. While each police officer who unjustifiably uses forces, deadly or otherwise, ought to be held personably accountable for the criminal behavior, many of the interactions between police and residents that lead to such incidents come not from the impetus of the individual officers but the democratic government and the laws its people support, even when in the specific they may cringe at its application to them or others. It's a demand for the impossible, enforcement of all the laws, even the constitutionally-questionable ones, in a constitutional manner.

Coming to grips with the way the laws "we" support contribute to the climate of constant police violence is a necessary precondition to changing that climate. Cops have transformed from peace officers to militarized forces, spurred by democratic governments either enforcing democratic laws that criminalize the things people put in their bodies because a majority decided it was wrong, or because they need the money (as seen in the DOJ report on policing as a source of revenue in Ferguson).

There is an undeniable racial component to the problem of police violence, one rooted in white supremacy. Cops, white and black, are more likely to view a black person as a greater threat. There's a reason in New York City and elsewhere marijuana arrests of black people are far higher than the rate of use broken down by race would suggest. Drug laws, nanny state laws, petty laws, offer a vehicle for such biases. Worse, they create the conditions for the use of force on people not commtting any inherent crime, whether racial biases exist or not.  People of all races are killed by police—95 percent men. They're disproportionately black but still more white than black, and Native Americans are most likely to be shot by cops.

Some commentators get painfully close to the realization that police violence is a tool of the democracy—of the masses. "We can talk about Michael Slager," wrote Greg Howard at Deadspin, "but he was, if almost certainly unwittingly, a tool. The issue is who wields him." Howard's answer is white supremacy, the institution that creates the biases in the cops, not democratic government, the institution that puts the cops on the street to use force in the enforcement of even the most petty laws, like selling loose, untaxed cigarettes. Eric Harris was shot by Robert Bates, a "reserve deputy" who said he thought he was using his taser. Harris was allegedly trying to sell an illegal gun, in Oklahoma, where gun laws are fairly lax, to an undercover cop.  Trying to sell an inanimate object to another person—a cop sent out to prevent people from selling that object to people other people don't think should own one—led to the killing of Eric Harris. The outrage over Bates' actions is deserved; they led to him killing Harris. But the outrage over his biases, racial or otherwise, may be most useful in avoiding the discussion of the kinds of inherently non-violent laws democratic governments command police officers to enforce with violence. "Abolish the police," Mychal Denzel Smith's Nation headline read. "Instead, let's have full social, economic, and political equality." How those things would be established without the use of violence isn't mentioned. Leaving people alone as a strategy to keep people from being killed by cops has, so far, remained too elusive, too radical, of a solution.