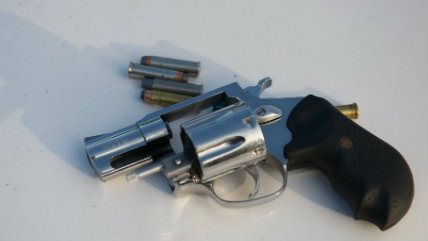 The appalling story of Eric Harris' death at the hands of Tulsa County cops continues to get worse. Harris was fatally shot earlier this month by Reserve Deputy Robert Bates, a volunteer officer who says he mistook his handgun for a Taser. Now sources say that Bates, 73, received no firearm or field training before being assigned to the county's Violent Crimes Task Force and that supervisors actually falsified records to make it appear Bates had received the state-required training.

Sources within the Tulsa County Sheriff's Office told Tulsa World that they were instructed to give Bates credit for field training he never received and firearms certifications he didn't have when he applied as an advanced reserve deputy in 2007.

At least three of reserve deputy Robert Bates' supervisors were transferred after refusing to sign off on his state-required training, multiple sources speaking on condition of anonymity told the World.

[…] Additionally, Sheriff Stanley Glanz told a Tulsa radio station this week that Bates had been certified to use three weapons, including a revolver he fired at Harris. However, Glanz said the Sheriff's Office has not been able to find the paperwork on those certifications.

No wonder a police investigator was quick to portray Bates shooting Harris as a totally understandable mix-up. But despite the police sergeant's sunny review, prosecutors have charged Bates with second-degree manslaughter for Harris' death. Video from the April 2 incident shows Harris—who was unarmed—pinned down on the ground by other deputies when Bates fired. After Harris complained that he couldn't breathe, one deputy can be heard telling him, "fuck your breath."

The Sheriff's Office told Tulsa World that claims about falsified training records were untrue. It also said it will conduct an internal review of the reserve deputy program that Bates and about 100 others take part in.

When not playing a police officer, Bates is an insurance executive. He was also manager of Sheriff Glanz's 2012 re-election campaign and has purchased five vehicles for the Violent Crimes Task Force.

In a statement, Bates said he had been trained in Dallas and Arizona and had been on "at least 100" missions with Tulsa County officers. On April 1 he contacted the office to ask if there were any pending operations he could help with and was assigned to a mission taking place the next day, in which undercover officers were buying a gun from Harris. Prior to being sent out, Bates was informed that Harris was a dangerous, "bad son of a bitch" with gang affiliations.

Auxiliary officer programs like the one Bates took part in are common around the country, reports the Wall Street Journal, with "thousands of reserve officers … carrying badges and guns but often lacking the qualifications or experience of their full-time counterparts." [Update: A commenter points out that Kid Rock is now a reserve officer in Michigan.]

Some reserve officers are volunteers, while others pay the city or county for the privilege of playing police. Some receive extensive training while in other places, like Louisiana, only firearm certification (no training) is required. "You can't even cut hair or work on plumbing in someone's house without the proper training," Caddo Parish Sheriff Steve Prator pointed out in the Journal. "Yet you can ride around and stop people and make life-and-death decisions and not be trained at all."