As states lunge for dot-com money, Congress threatens to get into the act. 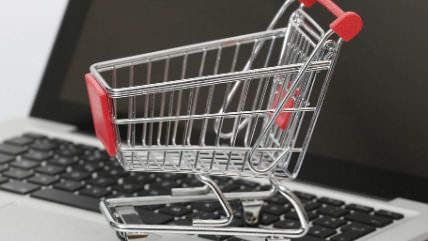 In 2014, U.S. sales on the Internet amounted to an estimated $305 billion. While still small in comparison to the $4.7 trillion in overall domestic sales, the online component grew 15 percent over the previous year, sending terror into the hearts not only of brick-and-mortar competitors, but of state legislators desperate to get their hands on sales-tax revenue.

Now the two groups are lobbying Congress to let state governments require businesses to collect sales taxes on out-of-state purchases made online. But they should be careful what they wish for: A bill on the subject is making headway on Capitol Hill, and it's not quite what the two lobbies wanted.

House Judiciary Chairman Bob Goodlatte (R-Va.) is circulating legislation—the Online Sales Simplification Act of 2015—that would make it easier for states to tax online purchases, while also limiting the states' power by allowing for something known as an "origin-based" sales tax. States would tax Internet sales based on the seller's location rather than the buyer's, the opposite of what sales tax expansionists have been pining for.

Under the bill, a California shopper who buys a product online from a vendor in Virginia would be taxed at Virginia's rate of 5.63 percent rather than California's rate of 8.41 percent. (Where local sales taxes exist, these would also apply.) Sellers with outlets in multiple states would collect taxes for the state where they have their largest presence.

The main benefit of an origin-based tax is that it encourages competition between the states, giving governments an incentive to limit their sales tax rates in order to attract and keep businesses. Such a system also allows consumers in high-tax states to escape the burden by buying from sellers in low-rate states. And because it allows taxes only on businesses within the taxers' jurisdictions, an origin-based tax is in line with constitutional protections for interstate commerce.

"Finally, someone in Congress has drafted an approach to the Internet sales tax issue that doesn't empower bureaucrats to tax across state lines and saddle Web-based retailers with enormous complexity," says Andrew Moylan, executive director of the pro-market R Street Institute. Moylan was alluding to the Marketplace Fairness Act, the states' preferred alternative to Goodlatte's bill. The act, which passed the Senate in 2013 but died in the House, would have allowed states to levy sales taxes based on buyers' locations.

As Moylan notes, that "would force online sellers to comply with the tax rules of as many as 9,998 different taxing jurisdictions nationwide, imposing huge compliance burdens and opening them up to audits from all 46 states with statewide sales taxes." It would also destroy tax competition by giving "state-level 'IRS' agents the unprecedented power to enforce their tax obligations on businesses all across the country even if [the businesses] lack a physical presence within [the agents'] jurisdiction."

Thanks to a 1992 Supreme Court decision (Quill v. North Dakota), a business must have a significant presence in a state before that state can require it to collect sales taxes. The online retailer Amazon must collect taxes from customers in 24 states, because its vast distribution network touches so many places. But most online retailers do not have Amazon's far-flung physical presence.

Many cash-hungry state governments have passed "affiliate nexus" laws, which redefine the concept of "significant presence" in absurd ways—stretching it, for example, so that it includes a blogger in the same state as the buyer who posts a link to an out-of-state vendor. This has led to a series of legal challenges, but the courts have so far encouraged states to continue pursuing such cash-grabbing schemes.

Even if state governments get their way and are able to require out-of-state sellers to collect taxes for them, that won't solve their budget problems. According to data from the Henry J. Kaiser Family Foundation, the states had a combined budget gap of $55 billion in fiscal year 2013. The main academic study that brick-and-mortar retailers cite to show how much money the government is leaving on the table comes from the University of Tennessee business professor William Fox, who estimates that $11.4 billion in annual sales taxes are going uncollected. And even that number is wildly exaggerated-a more realistic estimate was produced by Jeff Eisenach of the American Enterprise Institute and Robert Litan of the Brookings Institution, who put uncollected e-commerce sales taxes at just $3.9 billion in 2008. Were states able to collect every penny of that amount, it would still barely dent their cumulative shortfall.

Although the Goodlatte bill would help put a stop to the trend of state revenue authorities attempting to impose taxes on out-of-state entities, it's still a far cry from pure origin-based taxation. In an ideal scenario, all sales by businesses in California would pay sales taxes at California's 8.41 percent rate, regardless of the location of the buyer. The ravenous desire for more overall revenue, plus the secondary benefits of having companies based in the Golden State (jobs, for instance) would push Sacramento to consider lowering tax rates—driven by the kind of tax competition that benefits customers.

The discussion draft of the Goodlatte legislation offers a more complicated scenario: Virginia might offer a low sales tax with the hope of attracting companies to locate within its borders, and buyers from companies based in the Old Dominion would pay at the Virginia rate. But if the two states are part of the same tax clearinghouse then low-tax Virginia would be required to send the money collected from California buyers in Virginia to high-tax California through the clearinghouse. That means states would still receive money collected where they have no jurisdiction.

This is not as mechanically problematic as a destination-based tax, since the sellers need only collect sales taxes at one rate—that of the state where they are based. But it still gets in the way of the tax competition benefits of a true origin-based tax by diminishing the incentive for states to attract more businesses by maintaining or pursuing lower rates. If a high-tax state will still get some revenue collected from out-of-state sales, they have less reason to lower their rates.

Mitigating this problem from a customer's point of view is that the incentive remains to buy from sellers in low-rate states. And as R Street's Moylan notes, "cutting checks by formula" is one of the few things the government is good at.

The much bigger drawback is that Goodlatte's bill would impose taxes on customers buying from businesses in states that do not have a sales tax at all, such as Delaware and Oregon. A business in any of those states would be required to collect taxes from out-of-state buyers using the lowest combined state and local rate in the country. (At the moment, Wyoming takes that prize with a combined sales tax rate of 5.49 percent.) This provision, which is likely intended to grab more revenue, defeats the point of having an origin-based tax, since it forces certain businesses to collect taxes when they otherwise would not have to.

"The proposal would be improved substantially," Moylan says, "if it better protected sellers in non-sales-tax states (perhaps by allowing them to opt out of any collection scheme)." He also suggests other changes, such as passing legislation to impede the silly abuses allowed by affiliate nexus laws. But ultimately, Moylan thinks a version of Goodlatte's proposal would be "an enormous victory for the cause of sanity in taxation. It would solve the Internet sales tax debacle without imposing a cure worse than the disease and it would help reestablish borders as limits to tax state tax power."

If the goal is to wring as much tax revenue out of consumers as possible, this plan is not the answer. But as a way of making e-commerce taxes both fairer and more straightforward, we could do a lot worse.