From 'I Can't Breathe' to 'Fuck Your Breath': Tulsa Deputies Show Stunning Lack of Empathy in New Video of Eric Harris Shooting

Reserve Deputy Robert Bates said he thought he was holding a Taser, not a handgun, when he fired at Harris. 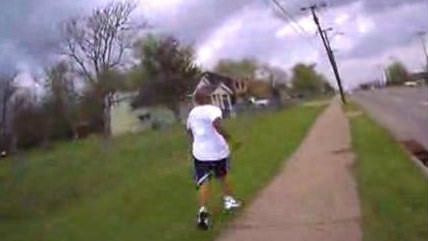 As several high-profile police shootings last summer stretched into a barrage of police brutality throughout the fall, the last words of NYPD-victim Eric Garner—I can't breathe—soon became something of an unofficial rallying cry for the burgeoning movement against police bias, militarization, and abuse. With that in mind, the words a Tulsa, Oklahoma, deputy spoke to an unarmed black suspect who had just been shot become all the more chilling: "Fuck your breath."

On April 2, several deputies including Robert Bates, a 73-year-old reserve deputy for Tulsa County, were pursuing 44-year-old Eric Harris for allegedly trying to sell an illegal gun to an undercover officer. Video shot by deputies with cameras in their sunglasses show Harris running and a deputy tackling him. Then, as Harris is laying on the ground subdued, a gunshot can be heard, followed by Bates: "Oh, I shot him. I'm sorry."

As Harris screams in pain, crying out that he didn't do anything to deserve being shot, an unnamed deputy replies, "You fucking ran. Shut the fuck up." When Harris says he's having trouble breathing, a deputy replies, "Fuck your breath."

Harris was taken to the hospital, where he later died. Deputy Bates said he thought he had been holding a Taser gun when he fired at Harris, not his handgun.

"Reserve deputies are generally volunteers, often with other full-time jobs," the Associated Press notes. When Bates isn't brandishing a state-provided firearm as a volunteer on the Violent Crimes Task Force, he works as an insurance company executive.

This sort of thing is "not all that uncommon," points out Lindsey Bever at The Washington Post:

Volunteer reserve officers have become a staple in the Tulsa sheriff's department, which reportedly uses about 100 of them, as well as in many other cities. It's not unusual for them to be out on assignment, Tulsa County Sheriff's Maj. Shannon Clark told the Tulsa World. By trade, they're bankers, doctors, lawyers, retired cops or even celebrities. They get varying degrees of training and they help the local police, not just by patrolling with them, usually at no cost, but also sometimes by bringing their own equipment, including weapons. Some departments even request donations in exchange for the positions.

Arming minimally-trained civilians and then sending them off to apprehend violent criminals (or at least people they've been told are likely violent criminals) seems 99.9 percent destined to end badly. And the deputy's comments after Harris was shot belie a truly disturbing lack of empathy. But according to Tulsa Police Sgt. Jim Clark, who recently finished investigating the incident, this was just a routine "slips and capture" problem, something that could happen to any of us.

At a press conference April 10, Clark said that people in emergency situations routinely believe they are doing one thing but accidently slip into doing something else. This can also happen in non-emergency situations, such as when someone tries to insert a car key into the wrong spot, Clark explained. In Bates' case, he simply slipped from using his Taser to using his handgun and "was not conscious of this unfortunate switch until after the shot was fired," Clark said. Prosecutors have not yet decided whether to file charges.

Update: Associated Press is reporting that Deputy Bates has been charged with manslaughter.