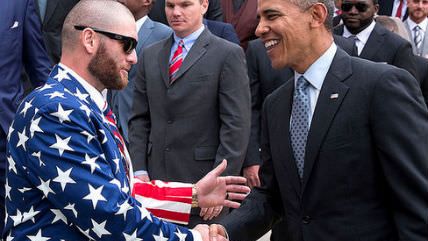 In an order issued today without comment or explanation, the U.S. Supreme Court declined to hear a high-profile First Amendment case challenging a California school district which banned several students from wearing shirts bearing the image of the American flag.

The case originated in 2010 when the Morgan Hill Unified School District forbid several students from wearing American flag-themed shirts on Cinco de Mayo over fears that their attire would spark racial violence between white and Hispanic students. School officials told the offending students to either turn their shirts inside out or go home. The students went home and subsequently filed a legal challenge alleging that the First Amendment had been violated because the school allowed a "heckler's veto" to trump their rights to peaceful free expression.

In February 2014, those students lost at the U.S. Court of Appeals for the 9th Circuit. "School officials anticipated violence or substantial disruption of or material interference with school activities, and their response was tailored to the circumstances," the 9th Circuit declared in Dariano v. Morgan Hill Unified School District. "As a consequence, we conclude that school officials did not violate the students' rights to freedom of expression." Notably, the 9th Circuit claimed that its ruling should be distinguished from the U.S. Supreme Court's landmark 1976 precedent in Tinker v. Des Moines Independent Community School District, in which the Court invalidated the suspension of three public school students for wearing black armbands in silent protest of the Vietnam War. According to the Supreme Court in Tinker, while school officials may have based their actions "upon their fear of a disturbance from the wearing of the armband… in our system, undifferentiated fears or apprehension of disturbance is not enough to overcome the right to freedom of expression."

To say the least, the 9th Circuit's judgement in Dariano would appear to be in conflict with the central free speech holding of Tinker. In fact, none other than Mary Beth Tinker and John Tinker, two of the original plaintiffs from that 1976 case, filed a friend of the court brief supporting the students against the Morgan Hill Unified School District in their appeal to the U.S. Supreme Court. "If students learn that threatening speakers is an effective way to suppress speech," the Tinkers told SCOTUS, "this will produce more threats, and more suppression of a wide range of other speech. And beyond this, even peaceful students will learn that free speech must yield whenever its opponents are willing to threaten violence—a message antithetical to all things this Court has tried to convey about the First Amendment."