The New York Times, a Corporation, Worries That the First Amendment Is Now 'Embraced by Corporations'

Are liberals turning on the First Amendment because it protects the free speech of corporate entities? 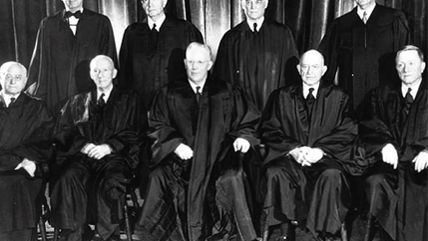 Yesterday's New York Times featured a story carrying this provocative headline: "First Amendment, 'Patron Saint' of Protesters, Is Embraced by Corporations." Here is the opening to that story:

Liberals used to love the First Amendment. But that was in an era when courts used it mostly to protect powerless people like civil rights activists and war protesters.

These days, a provocative new study says, there has been a "corporate takeover of the First Amendment." The assertion is backed by data, and it comes from an unlikely source: John C. Coates IV, who teaches business law at Harvard and used to be a partner at Wachtell, Lipton, Rosen & Katz, the prominent corporate law firm.

"Corporations have begun to displace individuals as the direct beneficiaries of the First Amendment," Professor Coates wrote. The trend, he added, is "recent but accelerating."

How recent a phenomenon is this shocking corporate takeover of the First Amendment? The Times does not provide a precise start date, but surely it must be at least as old as the year 1964. Why? Because that was the year when a wealthy and powerful corporation prevailed in the landmark First Amendment case known as New York Times Co. v. Sullivan. In that decision, the Supreme Court ruled in favor of the for-profit corporate entity (otherwise known as The New York Times) by rejecting a libel suit filed by a Jim Crow official from Alabama who objected when the paper published a letter critical of his local government's mistreatment of black Americans. If the corporation lost, the Court observed, "would-be critics of official conduct may be deterred from voicing their criticism," thus diminishing the scope of the First Amendment.

Seven years later, that same wealthy and powerful corporate entity prevailed in yet another landmark First Amendment case, a decision known as New York Times Co. v. United States. Here the Supreme Court invalidated the federal government's attempt to suppress publication of the so-called Pentagon Papers. According to Justice Hugo Black, the corporation had to win this dispute, otherwise the outcome "would make a shambles of the First Amendment."

On a personal note, when I first learned about these two cases back in college, I got the impression that liberals were happy with the outcomes. But I guess I was wrong. After all, a corporation did win them both.