Could Sheriff Joe Arpaio End Up Wearing Pink Underwear In His Own Jail?

It couldn't happen to a nicer guy 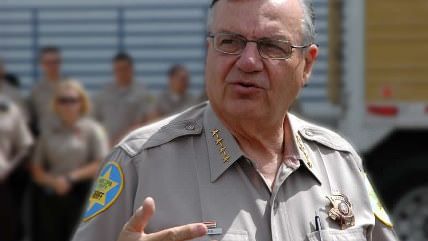 Oh, OK. Arizona's Maricopa County Sheriff Joe Arpaio is unlikely to bake under the desert sun, wearing his prisoners' trademark pink underwear in one of his signature jail tents any time soon. He runs a county jail, after all, and he faces federal criminal charges. But after two decades of spying on political opponents, abusing prisoners, terrifying immigrants, and taxpayers picking up the tab for all of the above, it's fun to think about.

The toughest sheriff in America's current troubles were telegraphed exactly a year ago, when U.S. District Judge G. Murray Snow, who had earlier ordered Arpaio and company to stop targeting Latinos for extra scrutiny and mistreatment, blew his stack in court.

But at the hearing on Monday, Judge Snow said that Mr. Arpaio and the chief deputy, Jerry Sheridan, had blatantly flouted his order, pointing as evidence to a video of a briefing that the two men held in October for a group of rank-and-file deputies who participated in a crime-suppression operation in southwest Phoenix. In the video, Mr. Sheridan called Judge Snow's order "ludicrous" and "absurd," and compared the restrictions the courts had placed on them to those imposed on the beleaguered New Orleans Police Department, whose officers, he said, "were murdering people."

"That tells you how ludicrous this crap is," Mr. Sheridan of the judge's order, as a videocamera recorded his every word.

Mr. Arpaio spoke next, telling the deputies, "What the chief deputy said is what I've been saying," adding, "We don't racially profile, I don't care what everybody says."

Last week, Arpaio "acknowledged he violated U.S. District Court Judge Murray Snow's orders on three instances, including a 2011 court order to stop detaining people solely on the suspicion they are in the country illegally." The admission came as part of an effort to keep his penalty in civil court—maybe, he suggested, he could make a tax-deductible charitable donation.

Criminal contempt could mean that Arpaio will have actual skin in the game, rather than cash donated by his nativist fans.

There are few times I want to contemplate an octogenarian in pink skivvies, but this is one of them. Even if it's unlikely to come to pass.