Giving Kids 'Help' At the End of a Gun

Defenders of the status quo push back against a Colorado proposal to decriminalize truancy. 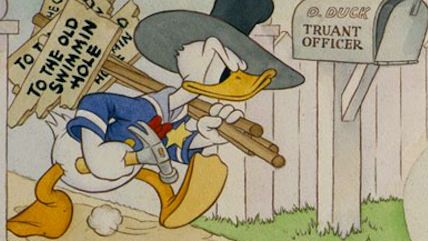 In January I noted that two Colorado legislators, Sen. Chris Holbert and Rep. Rhonda Fields, were preparing to introduce a bill to decriminalize truancy in their state. (The bill is now making its way through the lawmaking process.) Holbert is a conservative Republican and Fields a liberal Democrat, so they don't agree on a lot, but they do share the sensible notion that the possible punishments for skipping school should not include jail. At this time of backlash against over-the-top school-discipline policies, who could disagree with that?

Meet retired judge Dennis Maes, who attacked the proposal in an op-ed for The Pueblo Chieftain:

It appears that Sen. Holbert and others are opposed to placing status offenders in detention. A status offense is conduct which would not be a crime under the law of the jurisdiction in which the offense was committed if committed by an adult. Their belief is that when status offenders are placed in detention with children facing juvenile delinquency charges, they are negatively affected and perhaps even be attracted to criminal activity, themselves.

To my knowledge, there is no proven clinical study that validates such a premise. As a matter of fact, one of the indicators of potential juvenile delinquency is truancy, which supports the need for truancy courts. The vast majority of convicted felons show one thing in common—dropping out of school. There is a philosophical divide among those involved with status offenders concerning the use of detention time….

Sen. Holbert's bill is a giant step backward in addressing school engagement for at-risk students. If the bill passes, it will take years to unravel the damage done.

Anyway. Maes' argument—which has been embraced by the Chieftain's editors—reminds me of the debate last year before Baltimore adopted intrusive new curfews for children and teens. The Baltimore Sun endorsed the measures on the grounds that detaining and identifying these kids was "the first line of defense against allowing them to develop even more serious problems." It's a social-worker-with-a-gun attitude, a worldview that doesn't simply want to offer people help but is willing to threaten them with the bloody awfulness of the American detention system if they reply with a no-thanks.

I find this outlook deeply disturbing, but it has a long history in this country. As I wrote a few years back,

the history of the penal system and the history of welfare are closely intertwined, going back to the invention of the prison and the poorhouse. As the sociologist David Wagner writes in The Poorhouse, a social history of the institution, "two totally different ideas—hospitality and punishment—oddly enough became confused," with the old medieval institution of the almshouse and the newer, more punitive workhouse both falling under the "poorhouse" label in popular discussion. (Workhouses were rare in America, but poorhouses attempted with mixed success to enforce a regimen of labor. One 19th-century New York journalist, quoted in [Michael Katz's book In the Shadow of the Poorhouse], visited a Rhode Island institution where he saw "a party of men carrying wood from one corner of the yard to another and piling it there; when it was all removed it was brought back again and piled in the old place.")

It's telling, at any rate, that one of the centers Wagner studied, the poorhouse in Rockingham County, New Hampshire, evolved directly into both the county nursing home and the county jail. They share the same complex to this day.

As Maes' editorial shows, this worldview continues to thrive. I hope Holbert and Fields can overcome it.