This is what you get with GOP control of Congress 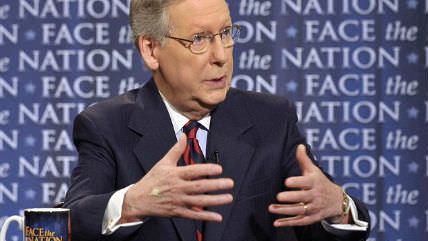 On Sunday, Senate Majority Leader Mitch McConnell (R-Ky.) reiterated something that Republican leadership has been emphasizing since re-taking control of both houses of Congress:

"I made it very clear after the November election that we're certainly not going to shut down the government or default on the national debt. We'll figure some way to handle that. And hopefully, it might carry some other important legislation that we can agree on in connection with it," McConnell said on CBS' "Face the Nation."

Yes, this is what you get with GOP control of the purse-strings: hopefully and might.

What happened to the Republican strategy of using the always-unpopular spectre of raising the debt ceiling as leverage to enact reforms to tamp down aspects of federal spending? CBS News puts it like this:

the fight over the debt ceiling that came during the 2013 government shutdown hurt the Republicans' standing among Americans, decreasing their appetite for confrontation.

With control over only the House of Representatives from 2011-2014, Republicans were able to leverage debt-ceiling increases into putting together a commission on long-term entitlement spending, then enacting the sequestration cuts when that commission failed to produce a deal, then pressuring the Democratic-led Senate to finally pass a budget in 2014 after several years of doing nothing. This should have led to a budget conference between the chambers to hammer out the difference between bills that proposed spending $3.5 trillion and $3.7 trillion (I'm pretty sure there's a midpoint in there somewhere!). Instead, GOP petulants like Sen. Ted Cruz (R-Texas) decided that appointing negotiators would be a big fat Beltway sellout, and so decided to stick to the awful business-as-usual of cramming what should be 12 separate spending bills into one big last-minute continuing resolution. But not before first shutting down the government over funding Obamacare.

"The way you win," Cruz told The Club for Growth late last month, "is you draw a line in the sand." When it comes to winning elections, Cruz has been right so far: After all, despite plentiful warnings that the shutdown would sink Republican chances in the 2014 midterms, something closer to the opposite took place. But when it comes to winning the policy, the GOP-led Congress is now funding Obamacare just as much as the divided Congress did before, and now debt-ceiling deadlines are occasions not for the meaningful possibility of restraining Leviathan, but for quick rubber stamps. It will be fascinating to see what kind of federal budget the party plops on President Barack Obama's desk.

"Let's avoid the theater and just move on with it," Rep. Justin Amash, R-Mich., said Tuesday. "They're just going to go through the motions anyways, and then whatever ideas conservatives put out there are going to be blamed for whatever standoff there is."

The above update is an old story, sorry.

UPDATE 2: Well, here's a statement from Amash's office! "The debt ceiling should be raised only if raising it is accompanied by reforms to the largest parts of the federal budget (entitlements and defense spending)."