Stockton has apparently learned nothing from its embarrassing financial boondoggle. 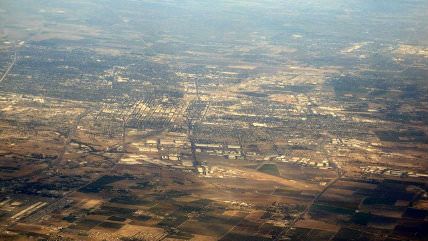 A judge may have approved the bankruptcy reorganization plan for Stockton, California, but he forgot to cut up the city's credit card.

Just a week out of Chapter 9 bankruptcy and the city is already throwing around the kind of money that landed it in financial ruin in the first place.

City officials announced plans this week to fund a $14 million public and private investment in "affordable" housing units and retail stores, with construction possibly beginning as soon as the end of the month. It's unclear how much will actually be privately funded.

"The reality is, no matter how compelling an item is, we can only afford what we can afford," Stockton city manager Kurt Wilson said last week, shortly after a federal judge approved the bankruptcy plan. Stockton owes $1.6 billion in unfunded pensions, but apparently the city leadership thinks a shiny new housing project counts as something they can afford.

Stockton refused to reform its soaring public pension liabilities last November by envoking the "California Rule," which effectively prevents a pension increase from ever being reduced. Then in December, the city approved a separate public housing project downtown.

Stockton's bankruptcy revealed a more fundamental problem. Officials for years had spent money like drunken longshoremen who had wandered away from the city's impressive inland port. They sprung for grandiose downtown redevelopment projects (sports venues, a hotel, entertainment) and lavished public employees with pay packages clocking in at 125 percent of state averages, despite living in a comparatively low-priced town. City workers received what one City Council member called a Lamborghini-style health plan, and police and firefighters could take advantage of a "3 percent at 50" pension formula that allowed them to retire at age 50 with 90 percent or more of their final pay.

It looks like Stockton's drunken longshoremen aren't planning to sober up any time soon.