D.C. Reinforces and Expands Its Ban on Public Pot Consumption

The new ordinance limits marijuana use to private residences. 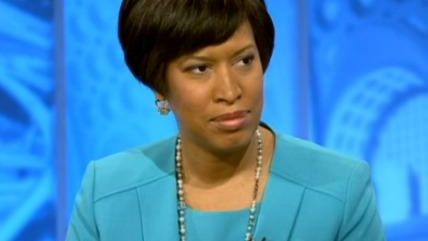 Last week I noted that Initiative 71, the marijuana legalization measure that took effect in Washington, D.C., on Thursday, seems to override the District's ban on "consumption of marijuana in public space." The initiative says "use" of marijuana by adults 21 or older "shall be lawful, and shall not be an offense under District of Columbia law." It says that is so "notwithstanding any provision of this chapter to the contrary." The "chapter" to which it refers is Title 48, Subtitle III, Chapter 9, which is the same chapter where the pre-existing ban on public consumption is located. Since Initiative 71 does not itself impose any restrictions on the locations where cannabis may be consumed, it seems to negate the earlier provision. If so, I wondered, what is the legal basis for continuing to charge people with public consumption (a misdemeanor), as the Metropolitan Police Department (MPD) planned to do?

Responding to that question, an MPD spokesman said I should contact D.C. Attorney General Karl Racine's office, which after some back and forth gave me this answer:

In the version of Initiative 71 that Racine's office sent me, the phrase "notwithstanding any provision of this chapter to the contrary" has been changed to "notwithstanding any provision of this act to the contrary," referring to the D.C. Controlled Substances Act. That change to the voter-approved text may be important in understanding how Initiative 71 interacts with the ban on public consumption, which was placed in a newly created Unit A-1 of Chapter 9. The Controlled Substances Act is in Unit A.

How and why was chapter changed to act? D.C. General Counsel Dave Zvenyach says the change "is likely the result of a technical amendment made after enactment." He explains that "Title 48 is not an enacted title of the D.C. code, so it's not technically correct to refer to or amend a chapter within title 48; instead amendments are made to the organic act codified in the title." As for the apparent conflict between Initiative 71 and the ban on public consumption, Zvenyach says, "that was noticed recently as an imprecision in the way I-71 was codified, and we are going update the code to reduce the confusion." Specifically, the phrase "nothwithstanding any provision of this act to the contrary" will be replaced by "notwithstanding any provision of this unit [i.e. Unit A, the Controlled Substances Act] to the contrary."

All this may not matter now that the D.C. Council has unanimously approved an "emergency" ordinance that Mayor Muriel Bowser proposed last week. D.C. Deputy General Counsel John Hoellen says the new ordinance "expressly provides that Initiative 71 is not to be construed as limiting the application of Section 301," the public consumption ban. He says the new ordinance also "will clarify that a private club generally is considered a place to which the public is invited," part of "public space" as defined in the existing ban. That provision anticipates cannabis clubs that either provide marijuana in exchange for a membership fee or let members consume their own cannabis on the premises.

D.C. officials seem determined to make sure that cannabis consumption does not happen (or at least does not happen legally) anywhere other than private residences. Backers of Initiative 71 criticize this approach as overly broad and call the new ordinance premature, since no cannabis clubs have appeared yet. "If this emergency bill passes," warned D.C. Cannabis Campaign Chairman Adam Eidinger on Twitter this morning, "I see no reason not to protest with a massive smoke-in for communal use."

Eidinger told The Washington Post there should be some allowance for places where cannabis consumers can gather outside their homes. "People should be able to go out, get a babysitter, smoke and then come home and be a responsible parent again," he said. "I want to see that scenario. If we made everyone drink at home, it would be a disaster."

Unlike the D.C. Council, the Anchorage Assembly seems prepared to tolerate cannabis clubs. In Colorado, Denver, the center of the state's marijuana industry, refuses to allow consumption in any business, even those open only to members. By contrast, Colorado Springs manages to allow cannabis clubs even as it bans recreational sales.

[This post, including the title, has been updated to clarify the impact of the new D.C. ordinance.]