A Strike Against State Regulation of Yoga Teachers in Colorado 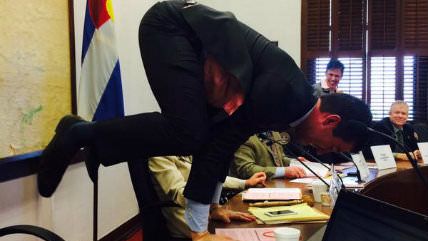 Yet under DPOS' requirements, passed in 2002, yoga-teacher training schools must be certified by the state, at a cost of $1,750 for the first two years and $1,500 every three years after that. Additional fees must be paid per student per quarter, and for every school "agent" authorized to enter into contract with students. And schools must also secure a minimum bond of $5,000. Enforcement of these requirements was lax until last fall, when one yoga teacher complained that only six of the state's schools were in compliance. DPOS responded by mailing letters to 82 training schools.

The backlash from yogis was swift. Nonprofit trade group The Yoga Alliance began lobbying against the regulations, and local yoga studios and teachers protested. "The state is trying to create a solution where there is not a problem," yoga instructor Nancy Levinson told the Denver Post.

Under S.B. 186, which passed the Senate education committee last Wednesday and now heads to the appropriation committee, yoga teacher training schools would be exempt from DPOS oversight. State law requires the agency to regulate private schools that charge tuition for occupational programs. But Sens. Woods and Dore argue that yoga teacher training is "avocational," meaning it is "designed to facilitate the personal development of individual persons … and not conducted as part of a program or course designed with the primary objective to prepare individuals for gainful employment in a recognized occupation."