Obamacare Returns to SCOTUS. What Will Roberts Do?

The Supreme Court prepares for another legal showdown over Obamacare. 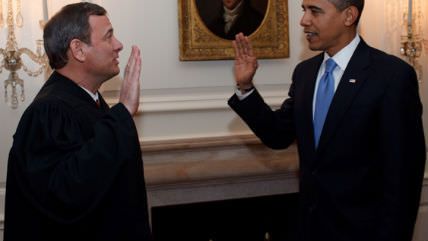 Three years ago, when the U.S. Supreme Court was gearing up to rule on the constitutionality of the Patient Protection and Affordable Care Act, most observers pegged Anthony Kennedy as the justice to watch. As one Slate reporter confidently put it, "The fate of health care reform is where it was yesterday, in the hands of Supreme Court Justice Anthony Kennedy." (My own prediction: Keep your eyes on Roberts.)

But as it turned out, Kennedy was not the justice to watch. The fate of health care reform actually rested in the hands of Chief Justice John Roberts, who voted to uphold Obamacare as an act of conservative judicial restraint.

This Wednesday Obamacare returns to the Supreme Court for another legal showdown. And this time, all eyes are properly focused on the chief justice. "There's one very good reason to think the chief justice will rule for the government again," asserts liberal lawyer Brianne Gorod. "He's too good a lawyer to do otherwise." Conservative law professor John Yoo, on the other hand, argues that this latest Obamacare dispute "will give the Chief Justice the opportunity to atone for his judicial sin of [three] years ago."

What will Roberts do this time around? There is at least some reason to think he may vote against the Obama administration. Here's why.

At issue this week in King v. Burwell is whether the Obama administration illegally implemented the Patient Protection and Affordable Care Act by allowing tax subsidies to issue to persons who bought insurance on health care exchanges established by the federal government. According to the legal challengers, Obamacare unambiguously forbids that result because the text of the law allows tax subsides to issue only in response to purchases made from an "Exchange established by the State," not from exchanges established by the Department of Health and Human Services in the 34 states that refused to set up their own.

The White House, by contrast, maintains that "the phrase 'Established by the State'…is a term of art that encompasses an Exchange established for a particular State by HHS." In other words, according to the Obama administration, the law's text does allow the issuance of tax credits via federally established exchanges because that result best achieves the law's broader purpose of providing "affordable care" nationwide.

Back in his 2012 Obamacare opinion, Chief Justice Roberts argued that "federal statutes" are owed a "full measure of deference" by the Supreme Court. He then granted that deference by saving the health care law from constitutional obliteration.

But the role of judicial deference is not so clear cut in the present case. According to the White House, Congress intended tax credits to be available regardless of which government entity established a health care exchange, which means the Court must show "appropriate respect to the choices Congress has made in the exercise of its democratically accountable authority."

But did Congress actually make the choice that the White House now ascribes to it? Or did the democratically unaccountable I.R.S. make the choice in order to facilitate the implementation of this complicated and unwieldy federal law? According to the legal challengers, "this case concerns an IRS rule that purports to implement, but in fact contradicts, the provisions of the Patient Protection and Affordable Care Act."

If the chief justice agrees with the challengers on that point, then the principles of judicial deference may point him in a specific direction: Namely, Roberts may decide to grant a "full measure of deference" to Obamacare by rejecting the White House's contested interpretation of it ("a term of art") in favor of the text that Congress specifically wrote into law ("Exchange established by the State").

That approach could prove quite appealing to the chief justice. It would allow Roberts to rule against the Obama administration in King v. Burwell while citing back to his own pro-Obamacare ruling in National Federation of Independent Business v. Sebelius. He would get to adopt the same deferential posture towards Congress in both cases (while lecturing his inevitable liberal critics on their inconsistency).

Will Roberts take this route? We'll get our first signs of his thinking during oral argument on Wednesday.